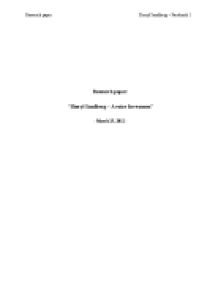 The Career of Sheryl Sandberg - Chief Operating Officer of Facebook, A voice for women

﻿Research paper Sheryl Sandberg ? Facebook Research paper: ?Sheryl Sandberg ? A voice for women? - March 25, 2012 - ________________ Research paper: Sheryl Sandberg ? A voice for women Photograph by Michele Asselin Introduction Sheryl Kara Sandberg is an American business woman and best known to people as the Chief Operating Officer of Facebook or the women that helped Mark Zuckerberg turn Facebook into a Multibillion Dollar company. Previously, she?s held the position of being Vice President of Global Online Sales and Operations at Google, she?s worked as Larry Summer?s Chief of Staff a at the Treasury Department, she was a management consultant at McKinsey & Company and as a research assistant at the World Bank. Sandberg has earned a master?s degree in business administration from Harvard Business School and a bachelor?s degree summa cum laude in economics from Harvard University. Additionally, she is married to David Goldberg, the CEO of SurveryMonkey, and has two young children. She is particularly well-known for being one of the few female executives working for online or internet-based companies, which is a sector which has been predominately male (Fenderson, 2012). The question remains, how did Sheryl Sandberg get to where she is today? Was she simply lucky or did she figure out how women can be successful in the world of business that is still very much dominated by men? Early life and career Sheryl was born on August 28th, 1969, in Washington, DC and is the oldest of three siblings. ...read more.

David who is also a Harvard Grad and internet executive like Sheryl, is the CEO of SurveyMonkey. Sandberg once stated, ?The most important career choice you?ll make is who you marry.? (Zap, 2012) The couple welcomed their first child in 2005 and today they have a 7 year old son and a 4 year old daughter. After the birth of her children she began to struggle with balancing work and domestic life. She also became aware that too many women were leaving the workforce after becoming mothers. Sandberg has hired a nanny to help take care of her children but admits that she feels pangs of guilt as she admitted in the New Yorker profile: ?I feel guilty working because of my kids? (Zap, 2012). Rankings, Awards and other Accomplishments Besides working for Facebook, being a wife and raising two young children, Sandberg joined the board of the Walt Disney Company in 2009 and the Board of Directors of Starbucks. Additionally, she serves on the boards of V-Day, Women for Women International, the Brookings Institution, and the Ad Council. When her mentor Larry Summers was criticized in 2008 for several comments he made about women she wrote an article on his behalf for the Huffington Post to support him. Sandberg was repeatedly ranked one of the fifty ?Most Powerful Women in Business? by Fortune Magazine since 2007. In 2007 she also ranked #19 in the Wall Street Journal?s list of ?Fifty Women to Watch? list. ...read more.

If I decided what I was going to do in college ? when there was no internet, no Google, no Facebook?. I don?t want to make that mistake? (Auletta, 2011). Conclusion Sheryl Sandberg is a truly astonishing woman that earns the title role model for women around the globe. She is still so young but has already accomplished so very much. Even though it wasn?t always easy for her as a woman in a male dominated field she wasn?t afraid to fight for where she wanted to go. In her case it wasn?t luck but simply very hard work and determination. On top of all of her involvements she still manages to raise children but she has to make sacrifices while doing so. I personally look forward to following Ms. Sandberg?s career over the next few years and see where she?ll be in the next decade or so. It would not surprise me in fact if she would be one of the countries first female President in the future. It?s not going to happen tomorrow but if women continue to be strong and fight hard for what they deserve I believe it is possible. Sheryl Sandberg for sure is not afraid of a challenge. Sandberg also knows that she can?t do this alone. In her commencement address to Barnard College graduates, she once said, ?We need women at all levels, including the top, to change the dynamic, reshape the conversation, to make sure women?s voices are heard and heeded, not overlooked and ignored? (Zap, 2012). ...read more.