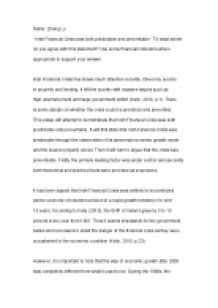 The Irish Financial Crisis was both predictable and preventable. To what extent do you agree with this statement?

This kind of economic growth mode itself was unsteady and might easily lead to a crisis. Moreover, the rise of house prices ?contained the seeds of its own collapse? (Kelly, 2010, p.3), which is another evidence of the predictable financial crisis. The research of Kelly (2010) shows that average secondhand house price in Dublin was 17 times earnings in 2006 while it was only 4 times earnings in 1995. Though some people were looking forward to a soft landing, the prices were likely to crash soon (Kelly, 2006), as the rising prices were simply based on the belief of the further growth of house prices (Kelly, 2010).Once it hit the limit, the crisis would became inevitable. Therefore, it could possibly be argued that Irish Financial Crisis was predictable. The main reason why Irish Financial Crisis was considered to be unpreventable is probably the uncontrollable low interest rate. As a member of euro, the Irish Central Bank did not have the right to set interest rate. ...read more.

Firstly, unlike the interest rate, mortgage size- the main factor led to the crisis-was still under the regulator?s control. As long as the Irish Central Bank limited mortgages to a normal level, house prices would rise mildly and the crisis could be prevented (Kelly, 2010, p.21). Moreover, both theoretical and practical facts were provided to the Irish government and the regulator as experience. For example, studies of Mendoza and Terrones (2008) show how relaxed regulation caused lending booms (Kelly 2010 p.20). The government could also learn a lesson from the housing booms of Finland and the Netherlands. Thus it is reasonable to suggest that Irish Financial Crisis was preventable. In conclusion, this essay has attempted to argue that although Irish Financial Crisis came in a sudden with destructive force, it was possible to predict and prevent it. However, the fact is the irresponsibility of the Irish banks; regulator and government made the Ireland economy a tough problem. It will still take a long time to see whether the bailout from the Irish government and the western society could work out at last. ...read more.