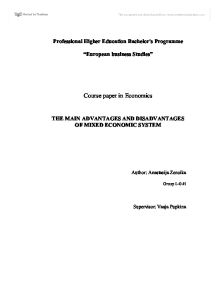 The Main advantages and disadvantages of mixed economy system

Professional Higher Education Bachelor's Programme "European business Studies" Course paper in Economics THE MAIN ADVANTAGES AND DISADVANTAGES OF MIXED ECONOMIC SYSTEM Author: Anastasija Zencika Group L-0-H Supervisor: Vasja Pupkina TABLE OF CONTENTS 1. Introduction 3 1.1. Relevance 3 1.2. The aim of the paper 3 1.3. Main tasks 4 1.4. Methods used and structure of the paper 4 2. Literature survey 5 2.1. Traditional economy 5 2.2. Command economy 5 2.3. Market economy 7 2.4. Mixed economy 8 2.5. New economy 8 3. Economic Analysis 10 3.1. Macroeconomic indicators for USA 10 3.2. Macroeconomic indicators for United Kingdom 13 3.3. Macroeconomic indicators for Norway 16 3.4. Macroeconomic indicators for China 19 3.5. Macroeconomic indicators for France 22 3.6. Comparative analysis 25 4. Conclusions 27 5. Recommendations 28 References 29 1. Introduction 1.1. Relevance Today many people start thinking about things that never concerned them before. I think that five years ago there were two times less people who had at least basic insight in economics and how finances work than there are now. Problems make us start thinking and analyzing, that is the way problems are solved actually. And now, during the economic crisis, more and more people are having thoughts whether the world is going on the right way, or in other words, is the market economic system a completely flawless model or should economy be more controlled by the government? Or maybe we should all switch to socialism, as there are some impressing examples of efficiently working socialistic economies? There is no country in the world with absolutely free market economy and our today's world's economy is mixed. But definitely, the reason for today's global economic crisis is a free market economy and inactivity of the governments. The main issue for many countries today is to find the most efficient way to combine market economy and governmental control, because in order to survive in this crisis and to avoid it in future, we should change something in our ways of life and thinking. ...read more.

The main assets in modern businesses are intangibles, or in other words, human and intellectual resources. That is why many Asian countries are rising today, and from the first sight it may seem that they rise from nowhere, because they did not have any significant natural resources or previous experience. In New economy there are no more geographical borders or limitations, which makes competition more pure and efficient. For example, e-shops. 15 years ago a regular shop could give higher prices, knowing that another shop is too far and customer will not even know that the price is higher than it should be. Today we can compare prices on every goods with prices worldwide, and it can be done with just a few mouse-clicks. 3. Economic Analysis In this part I will show a comparative analysis of the main macroeconomic characteristics between more capitalistic countries and more socialistic countries in order to find out which of them are more or less exposed to global economic crisis. I have chosen 5 countries and put them in two groups. USA and United Kingdom are in the first group, as these two countries are the most capitalistic in the world. The second group consists of China, France and Norway as these countries have a socialistic deviation. 3.1. Macroeconomic indicators for USA The US economy is considered to be the largest and most powerful in the world. It is well developed in all spheres, but at the same time many specialists blame USA for today's World Economic Crisis, which, in their opinion, was caused by lack of government intervention into US stock markets, banking services and estate markets. It is a market-oriented economy with public social expenditures of 16.2% (as a percentage of GDP) in the year 2003. Real GDP growth rate in USA As seen on the figure 3.1, GDP growth rate in USA was increasing until 2005, but there was a 1.2% fall in 2006, after which in 2007 GDP growth rate has not changed. ...read more.

But despite worse macroeconomic results, French government offers its citizens better social security. 4. Conclusions The aim of the theoretical basis was to demonstrate the most important economic systems and their advantages and disadvantages. Briefly speaking, Market economy's strong side is its ability to evolve and develop efficiently, and its weak side is a possibility of various depressions and crises. On the other hand, Command economy is much more stable and theoretically must be able to avoid any economical problems, but in practice it faces problems with bureaucracy and low motivation to work and improve efficiency in almost all spheres. Mixed economy represents a blend of these two systems, which may contain advantages and disadvantages of both, and everything is dependent on government's decisions. And finally, the New economy, which is probably going to be the economic system of the future, where main assets are intangibles, such as human and intellectual resources and where the success of any business depends on usage of modern technologies. The economic analysis part contains main macroeconomic indicators (public social expenditure, GDP growth rate, unemployment rate, inflation rate) for five economies that were divided into two groups. It also contains comparative analysis for these countries. After analyzing this data, it became clear that countries with stricter governmental control are able to cope with crisis more efficiently than those with more liberal economy. 5. Recommendations 1. It is recommended to all countries to reconsider their approach to market economy during the crisis and to make governmental control tighter. Actions should be made in order to save important businesses by subsiding or even buying them (interventions), and fiscal policy should be supportive on the first place and aimed to gain major part of budget from high income class citizens. 2. In order to decrease probability of economic crises in future, world should make a New economy as a major philosophy as soon as possible, as it will make principles of Market economy closer to reality due to increase of competition. 1. ...read more.