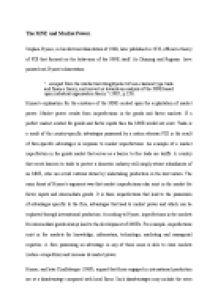 The MNE and Market Power

﻿The MNE and Market Power. Stephen Hymer, in his doctoral dissertation of 1960, later published in 1976, offered a theory of FDI that focused on the behaviour of the MNE itself. As Dunning and Rugman have pointed out, Hymer's dissertation: "...escaped from the intellectual straightjacket of neo-classical type trade and finance theory, and moved us towards an analysis of the MNE based upon industrial organisation theory." (1985; p.228). Hymer's explanation for the existence of the MNE centred upon the exploitation of market power. Market power results from imperfections in the goods and factor markets. If a perfect market existed for goods and factor inputs then the MNE would not exist. Trade is a result of the country-specific advantages possessed by a nation whereas FDI is the result of firm-specific advantages in response to market imperfections. An example of a market imperfection in the goods market that serves as a barrier to free trade are tariffs. A country that erects barriers to trade to protect a domestic industry will simply attract subsidiaries of an MNE, who can avoid customs duties by undertaking production in the host nation. ...read more.

These advantages should enable the firm not only to achieve higher profits than they would by operating at home, but also to earn more than the local firms of the host country. These intangible assets that firms posses may include brand names, managerial expertise, patented technology and economies of scale. For a firm to operate overseas these assets must be firm-specific and transferable to the subsidiaries. For Hymer, these advantages help the MNE close markets and therefore increase market power. While the possession of intangible assets is a necessary condition for foreign production, they are not a sufficient explanation of why firms undertake FDI. As Agarwal (1980) points out, a firm in possession of intangible assets, and therefore possessing an advantage over rival firms in a foreign market, can simply exploit these advantages through exporting, rather than FDI. The preference for FDI over exporting can partly be explained by the locational advantages offered by a particular country or region. Such advantages may include lower production costs, the size of the market, political stability, a favourable regulatory environment and inducements to invest. ...read more.

While both Hymer and Kindleberger argue that market imperfections are central to their theory of the MNE, neither identify internalisation specifically as a paradigm for a theory of FDI. The idea of internalisation is fundamental to the theory of the MNE, and will be discussed in the next section. As McCulloch states: "Direct foreign investment is precisely a firm's internalization of economic activity across a national boundary - internationalization of management." (1990; p.187). Despite the limitations of Hymer's work, it is widely regarded as seminal in the field of international production, as it was the first time that the idea of market imperfections was applied as an explanation for the MNE. The work of Hymer therefore laid the groundwork for future research in the theory of the MNE. ________________ [1] Kindleberger (1984) argued that Hymer, through his general discussion of market imperfections did indeed understand the importance of transaction costs. Rugman however, refutes this, arguing that Hymer's focus was on the ability of the MNE to use it's monopolistic power to close markets. He argues: "At no point in the thesis does Hymer make explicit statements about either internalisation or transaction cost arguments." (1986:p.104) ...read more.