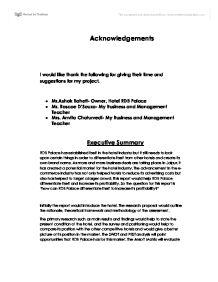 The opportunity exists whereby RDB Palace, a low budget hotel, can differentiate itself to be known as the best budget hotel in the city of Jaipur. It is looking at the marketing strategies in order to reach that level.

Acknowledgements I would like thank the following for giving their time and suggestions for my project. * Mr.Ashok Baheti- Owner, Hotel RDB Palace * Mr. Roscoe D'Souza- My Business and Management Teacher * Mrs. Anvita Chaturvedi- My Business and Management Teacher Executive Summary RDB Palace has established itself in the hotel industry but it still needs to look upon certain things in order to differentiate itself from other hotels and create its own brand name. As more and more business deals are taking place in Jaipur, it has created a potential market for the hotel industry. The advancement in the e-commerce industry has not only helped hotels to reduce its advertising costs but also has helped to target a larger crowd. This report would help RDB Palace differentiate itself and increase its profitability. So the question for this report is "how can RDB Palace differentiate itself to increase its profitability?" Initially the report would introduce the hotel. The research proposal would outline the rationale, theoretical framework and methodology of the assessment. The primary research such as main results and findings would help to state the present condition of the hotel, and the survey and positioning would help to compare its position with the other competitive hotels and would give a better picture of its position in the market. The SWOT and PEST analysis will point opportunities that RDB Palace has for this market. The Ansoff Matrix will evaluate the market for hotels. The secondary research would then help in knowing the information which can't be collected through primary research. After analysing, the report concludes by recommending RDB Palace to differentiate itself in order to increase its profitability. INTRODUCTION of RDB PALACE RBD Palace was started 7 years ago by Mr.Ashok Baheti. The hotel is named after Mr.R.D.Baheti. The hotel is located in the heart of the city of Jaipur, a major tourist destination in the desert state of Rajasthan. ...read more.

Survey of 30 tourists and 30 business corporate. A few questions were asked and I analyzed the answers. Analysis of the survey of 30 hotels, 30 tourists and 30 business travelers * The survey has brought forward the fact that 36 % of the hotels promote their hotel online and 33 % of the tourists and 37 % of the business corporates book their rooms online. The survey has also proved a point that hotels promote their hotel through taxi drivers and agents in railway station and in the bus stand i.e. 17 % and * Only 6 of the surveyed hotels provide food to local customers and 1 is in the process in doing that. * All those hotels that have a website get a greater number of international customers than those which don't have a website. * All the business corporates and a majority of the tourists prefer to stay in the same hotel and the most important thing that they look for in a hotel is price followed by service and location. * 70% of the times, the firm pays for the business corporates and 30% of the times, they come on their own. NEW ANSOFF MATRIX PRODUCT MARKETS EXISTING EXISTING NEW * * * RDB Palace is currently targeting business corporates and tourists with low income levels and it is trying to increase the number of the business corporates by creating a new image. * Only six five of the surveyed hotels have a restaurant for local customers and RDB Palace is not one of them, though it is thinking of starting one. * RDB Palace has not yet tried sending agents to the railway station and the bus stand. NEW * RDB Palace has not tied with any of the companies yet but it is trying to tie up with several companies because more and more business deals are taking place in Jaipur. ...read more.

It provides subsidy to many hotels in Jaipur to promote Rajasthan tourist industry. * There are lesser political barriers in opening a hotel than starting any other business. ECONOMICAL: * Jaipur is the most developed city of all the cities in Rajasthan making it a very good tourist destination. * Strong competition from other budget hotels constraints the profit. * High traffic, pollution and delayed bus and train services also create a problem. SOCIAL: * As most of the population is middle clas, there is a high demand for the budget hotels. * Many business activities taking place in Jaipur has led to an increase in the number of corporate clients. TECHNOLOGICAL: * Advance in technology has led to an increase in demand for Wi-fi and internet services; this in turn has affected the number corporate clients in hotels which do not provide this service. * Many hotels have their websites where a person can book rooms online; RBD PALACE has not yet introduced itself to this technology. SWOT analysis of RDB PALACE STRENGTHS: -.5 km away from the railway station -1.5 km away from the bus stand -Its pricing strategy ( prices are generally kept low to attract customers) -All the rooms are air conditioned and have a colour television -Banquet hall with a capacity of 40 people WEAKNESS: -Location: Though it is located near the railway station and the bus stand, it has a bad environment -Untrained workers -Low promotion and advertisement because of a low budget -Not spacious OPPORTUNITIES: -Increase in the number of tourists because Jaipur being a tourist destination -Government's support to tourist industry THREATS: -Other budget hotels -A large number of hotels of the same category in the same area, thus increased competition -Large hotel chains establishing in India SWOT ANALYSIS:- A SWOT analysis is a very useful decision-making tool. It can be used to assess the current and future situation of a product, brand, COMPANY or decision. A SWOT analysis of RDB PALACE was carried out in order to understand the strengths, weaknesses, opportunities and threats. ...read more.