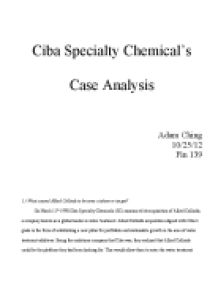 The value of the gains that Ciba saw in the takeover of Allied Colloids was based on financial reporting, improving product performance as well as increasing value for their shareholders

If Hercules was to purchase Allied Colloids, they feared large job losses were inevitable. If I were to determine a clear loser out of all of this it would have to be Hercules. Not only did they lose out on the technological benefits that were paramount within Allied Colloids, but Hercules calculated if they were to acquire Allied Colloids they would save 200 million a year in costs in addition to other benefits. 5.Post-script: Search online and provide a brief post script of the case since the acquisition. Your answers to questions 1-4 must be independent of your answer to question 5. Your answer to this question may contradict your answers to 1-4 above. In recent years Ciba, the acquirer or Allied Colloids, has been acquired itself. The purchasing company is the world?s biggest chemical group known as BASF who finalized the deal in 2009. Ciba?s downfall had been its lack of backward integration which led to margin erosion. Ciba and BASF?s board of directors reached an agreement in which all parties agreed on the merger. The transaction was finalized early April 2009 at a price of 6.1 billion Swiss Franc?s or about $5.5 billion. This result was surprising considering Ciba?s strength and growth in the late 1990?s and early 2000?s. ...read more.