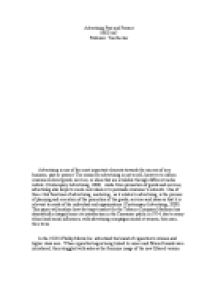 This paper will analyze how the target market for the Tobacco Company Marlboro has dramatically changed since its introduction in the Consumer public in 1954.

﻿Advertising Past and Present MKT/447 Professor: Tim Becker Advertising is one of the most important elements towards the success of any business, past or present. The reason for advertising is not to sell, however to inform consumers about goods, services, or ideas that are available through different media outlets. (Contempary Advertising, 2008). Aside from promotion of goods and services, advertising also helps to create new ideas or to persuade consumer?s interests. One of three vital functions of advertising, marketing, as it relates to advertising, is the process of planning and execution of the promotion of the goods, services and ideas so that it is relevant to needs of the individual and organizations. (Contempary Advertising, 2008). This paper will analyze how the target market for the Tobacco Company Marlboro has dramatically changed since its introduction in the Consumer public in 1954, due to many ethical and social influences, with advertising campaigns aimed at women, then men, then teens. In the 1920?s Phillip Morris Inc. advertised the brand of cigarettes to woman and higher class men. ...read more.

(Marlboro Man, 2002). The famous and very profitable Marlboro man advertising campaign, a campaign that generated over 20 billion dollars in sales between 1955 and 1957 soon resurfaced. In the report filed by Professional news correspondent, Kathleen Schalch, a Jack Landry, Brand Manager for Phillip Morris made the following comment; ?In a world that was becoming increasingly complex and frustrating for the ordinary man," Landry explained, "the cowboy represented an antithesis -- a man whose environment was simplistic and relatively pressure free. He was his own man in a world he owned." Due to the economic and social pressures that were being faced on individuals in that time, Phillip Morris, Inc. used those influences to resurface and re-establish a brand that was consistent in its idea. In 1964 the Federal Trade Commission (FTC) and Federal Communications Commission (FCC), although not placing a legal mandate, stated that advertising companies of tobacco had a responsibility to warn consumers of the potential dangers of tobacco. It wasn?t until 1969 that congress, receiving pressure from the Surgeon General?s reports of the effects of smoking and large public influence, made it mandatory to place warning labels on tobacco products. ...read more.

November 28th 1998, the major tobacco companies, such as Phillip Morris, Inc entered into what is known as a Master Settlement Agreement (MSA) (MSA, 2012). This settlement was an agreement between companies and 46 states to seek and enact initiatives tobacco smoking to minors and setting standards of governance in regards to the tobacco industry. This was a pivotal change in course for Marlboro as a main initiative of the agreement is that no tobacco company can enact in the promotion, marketing or advertising of tobacco or tobacco based products that targets the youth. This also included sponsorships for events that are youth based. This along with many other government mandates and agreements have been crucial force in the way in which the company has promoted, marketed and advertised its products since its initial introduction in 1952. Philip Morris ?Advertising and Tobacco Use." Encyclopedia of Drugs, Alcohol, and Addictive Behavior. Ed. Rosalyn Carson-DeWitt. Vol. 1. Gale Cengage, 2001. eNotes.com. 20 Jul, 2012 Day In history. ?Nixon Signs Legislation Banning Cigarette Ads on tv and Radio. Retrieved 20 July 2012 from http://www.history.com/this-day-in-history/nixon-signs-legislation-banning-cigarette-ads-on-tv-and-radio Marlboro Man. Retrieved July 20 2012, from http://www.npr.org/programs/morning/features/patc/marlboroman/ MSA. 2012. ?Master Settlement Agreement?. Retrieved 20 July 2012 from http://ag.ca.gov/tobacco/pdf/1msa.pdf ...read more.