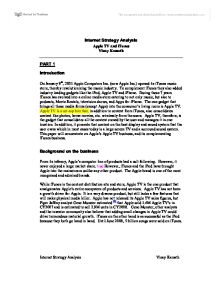 This paper will concentrate on Apples Apple TV business, and its complementing iTunes business.

Internet Strategy Analysis Apple TV and iTunes Vinay Kamath PART 1 Introduction On January 9th, 2001 Apple Computers Inc. (now Apple Inc.) opened its iTunes music store, thereby revolutionizing the music industry. To complement iTunes they also added industry leading gadgets like the iPod, Apple TV and iPhone. During these 7 years iTunes has evolved into a online media store catering to not only music, but also to podcasts, Movie Rentals, television shows, and Apps for iPhone. The one gadget that brings all these media forms (except Apps) into the consumer's living room is Apple TV. Apple TV is a set-top box that, in addition to content from iTunes, also consolidates content like photos, home movies, etc. wirelessly from the users. Apple TV, therefore, is the gadget that consolidates all the content owned by the user and manages it in one location. In addition, it presents that content on the best display and sound system that the user owns which in most cases today is a large screen TV and a surround sound system. This paper will concentrate on Apple's Apple TV business, and its complementing iTunes business. Background on the business From its infancy, Apple's computer line of products had a cult following. However, it never enjoyed a large market share. true However, iTunes and the iPod have brought Apple into the mainstream unlike any other product. The Apple brand is one of the most recognized and admired brands. While iTunes is the content distribution site and store, Apple TV is the one product that amalgamates Apple's entire ecosystem of products and services. Apple TV has not been a growth driver for Apple. It is a very diverse product, but still lacks a few features that will make physical media killer. Apple has not released its Apple TV sales figures, but Piper Jaffray analyst Gene Munster estimated [1] that Apple sold 1.6M Apple TV's in CY2007 and is estimated to sell 2.9M units in CY2008. ...read more.

* Cable and Satellite TV customers - A large number of Cable TV customers pay large cable TV bills even when they don't watch much TV. This is because cable TV companies bundle channels into packages. A consumer has to subscribe to a package with maybe 50 channels to get the 2 channels he/she is interested in. Such customers also form a large segment for iTunes and Apple TV. TV shows become available on iTunes (with or without Apple TV) almost immediately when they are telecast on cable. Users can rent TV shows from close to a 100 different channels on iTunes. This means that the user can selectively pick the shows he/she wants to watch, paying for only what was downloaded. Someone who only watches 3 or 4 TV shows can make huge savings by using the iTunes and Apple TV model. * Movie Lovers - Movie lovers can rent any movie and watch it instantly, without having to drive to a video store or having to receive and mail DVDs. They can rent any movie (large number of them in HD quality) by the click of a button without leaving their couch. A movie rented is ready to be watched within 30 seconds of ordering since Apple TV streams the movie simultaneously. In addition, the movie can be completely downloaded to the hard disk built inside Apple TV and watched at a convenient time. Movies are also available for download the day the DVD is released, which also means that you can watch a movie even as the local Blockbuster is out of stock. Is what I was looking for before, but some demos or something to let me know how I could reach these behavioral segments would be useful Customer Acquisition Strategy The Apple Brand "People talk about technology, but Apple was a marketing company," John Sculley, Apple's marketing executive from the late 80's to early 90's told the Guardian newspaper in 1997. "It was the marketing company of the decade." ...read more.

Since digital media is eating up more and more market share the growth potential for Apple TV is seems to fit the current trendendless, and needs to be exploited through a well engineered marketing program. This marketing program needs to be aimed at individuals who are going digital for their video viewing habits [22]. Apple TV should be Apple's strategy to bring that digital content from PC back to TV. Shows a good understanding of this fascinating brand. Good info and presentation-missing 3 relevant sections as noted above. Interesting appendices; would have embedded them in the text-easier for electronic reading. Overall, well done with exception of the other elements that needed to be covered. Entire Strategy Assignment A- Fig. 6: Change in Video watching habits From 2007 and 2008 Source: Marketing Charts [22] The future continues to be very bright for iTunes due to its brand and due to its ever-increasing features. It has a very good integrated marketing program by itself. It also features in the integrated marketing programs of its complementary products like iPod, iPhone and Apple TV. The integrated marketing program for Apple TV, however, needs a huge facelift. Even though the public expects more than the features it currently has, it is by far the best personal content management products out in the market place. It needs to be marketed a bit more aggressively. On the retail front, it should be promoted along with media rich computers and home theater systems. On the online front, it should be showcased more often on the Apple site. Apple should dig more deeply in its customer and non-customer data to surgically market the product to consumers who may largely benefit with Apple TV. Appendix Fig A. Example of Apple TV E-mail marketing - Retention and Acquisition strategy. Fig B. Landing Page from an Organic search link Fig. C. Landing Page from a Paid Placement - in this case Amazon.com selling Apple TV Fig. D. Example of iTunes E-mail marketing - Retention strategy. ...read more.