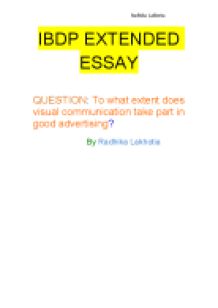 To what extent does Visual Communication take part in good advertising?

ï»¿Radhika Lakhotia IBDP EXTENDED ESSAY QUESTION: To what extent does visual communication take part in good advertising? By Radhika Lakhotia Abstract In this essay I have attempted to show the extent of visual media in advertising. The question I used as my basis is “to what extent does visual communication take part in good advertising?” The sources I have used to answer this range from statistical studies, print media, The conclusion was that intelligence, measured as IQ, is malleable. It is important, though, to understand the conditions under which progress can be observed since no short or superficial method exists. Permanent gains can only be achieved if regular cognitive, emotional and physical stimulation is present on a continuous basis during the important formative years. Contents Introduction Body ï Brief introduction on visual communication and advertising ï What is promotion? ï The power of visual perception and the mind ï Differences between the approach of graphical and textual description ï Need and Importance of advertising ï Research findings Conclusion Introduction Humans are often referred to as visual animals. Out of all the senses we have we rely on our eyes the most. This has been the case since many generations And hopefully will be the same always. Our eyes are so much more attracted to pictures than text, which is why we first look at picture in an add before we read the words beside it. ...read more.

Visual perception delivers the world to our brains at high speeds and with fine keenness. If we want to present information to people?s eyes, we must understand a little about how the eyes work, including some very real limitations. One of the leading lights in visualization research today is Dr. Colin Ware of the University of New Hampshire. He expertly explains the importance of visualization and how it works. ?Why should we be interested in visualization? Because the human visual system is a pattern seeker of enormous power and subtlety. The eye and the visual cortex of the brain form a massively parallel processor that provides the highest-bandwidth channel into human cognitive centers. At higher levels of processing, perception and cognition are closely interrelated, which is the reason why the words ?understanding? and ?seeing? are synonymous. However, the visual system has its own rules. We can easily see patterns presented in certain ways, but if they are presented in other ways, they become invisible...The more general point is that when data is presented in certain ways, the patterns can be readily perceived. If we can understand how perception works, our knowledge can be translated into rules for displaying information. Following perception- based rules, we can present our data in such a way that the important and informative patterns stand out. If we disobey the rules, our data will be incomprehensible or misleading.? (Information Visualization, Second Edition, Colin Ware, Morgan Kaufmann Publishers, 2004, page xxi) ...read more.

It helps to increase the sale of prevailing products by entering into new markets and attracting new customers. Advertising makes purchasing easy for consumers by reducing the time and effort involved in shopping. People become aware of the source and availability of different products and need not search them out. Advertising provides employment to persons engaged in writing, designing and issuing advertisements. Increased employment brings additional income with the people, which stimulate more demand. Research Findings: Communication is most successful when you write neither more nor less than what is pertinent to your message. People discern visual differences in an information display as differences in meaning. The visual properties that work best for representing quantitative values are the length or 2-D location of objects. People become aware of differences in the lengths or 2-D locations of objects fairly factually and interpret them as differences in the actual values that they represent. People perceive things that appear connected as wholes and things that appear disconnected as separate. People pay most attention to and consider most important those parts of a visual display that are most predominant. Short-term memory is limited to about four types of information at a time. Conclusion I draw a close to my essay by saying that visual communication indeed plays an important role in advertising. Effective visual communication is ataned by displaying information in a way that enables people to clearly see an accurate representation of your message and understand what they see. ...read more.