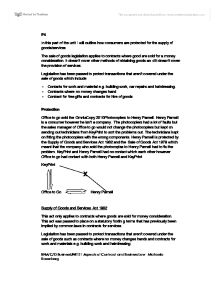 The sale of goods legislation applies to contracts where good are sold for a money consideration. It doesn’t cover other methods of obtaining goods and it doesn’t cover the provision of services.

Legislation has been passed to protect transactions that aren’t covered under the sale of goods which include:

This act only applies to contracts where goods are sold for money consideration. This act was passed to place on a statutory footing terms that has previously been implied by common laws in contracts for services.

Legislation has been passed to protect transactions that aren’t covered under the sale of goods such as contracts where no money changes hands and contracts for work and materials e.g. building work and hairdressing.

If you've hired someone to do some work, your rights are protected by The Supply of Goods and Services Act 1982, which states that someone providing a service must do it:

This means the trader providing the service has a duty of care to you and your property, and should complete the job in good time and at a reasonable cost, even if you didn't agree a deadline for completion or a final price in advance.

In addition, any goods fitted during the work are covered by legal controls under the Supply of Goods and Services Act which says they must be:

If the service is not in accordance with these standards, you are entitled to get a full or partial refund, replacement or repair.

How consumers are protected by the act

Consumers are protected in contracts for the supply of goods/services by sections 13 of the Supply of Goods and Services Act 1982. This is an implied term about care and skill. The consumer is protected by this act as it’s an implied skill that the supplier of the goods has to carry out the service with reasonable skill and care otherwise the photocopiers that the suppliers are supplying could break.

How consumers are protected by the act

Section 14 and 15 of Sale of Goods Act 1979 state how the consumers are protected by goods and services that they purchase from a supplier.

The rules that Office to go have to follow when selling their photocopiers to KeyPrint in relation to protecting their consumers are:

As the goods were not fit for purpose Henry Parnell had the right to return the photocopiers to Office to go.