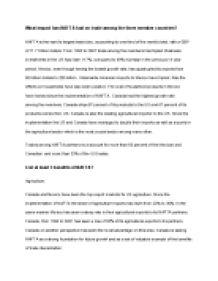 What impact has NAFTA had on trade among the three member countries?

﻿What impact has NAFTA had on trade among the three member countries? NAFTA is the world?s largest trade bloc, accounting to one third of the world?s total, with a GDP of 11.7 trillion dollars. From 1993 to 2007 trade among the members has tripled. Business investments in the US has risen 117%, compared to 49% increase in the previous 14 year period. Mexico, even though having the lowest growth rate, has quadrupled its exports from 60 billion dollars to 280 billion. Meanwhile American imports to Mexico have tripled. Also the effects on households have also been positive. The cost of household products in Mexico have halved since the implementation of NAFTA. Canada had the highest growth rate among the members. Canada ships 87 percent of its products to the US and 67 percent of its products comes from US. Canada is also the leading agricultural importer to the US. ...read more.

Labor Market: US labor market is now employing 27 million more people from the date of the NAFTA`s implementation. Also, the unemployment rate has dropped 2%. However, some analysts agree that the agreement has been unfair to the US market since the partner countries don?t have as much labor and environmental standards. These analysts also agree that the US employees should be put into more direct competition. For mexico, unemployment is now higher than it was. Also for the farm markets it is harder for the farms to compete with subsidized US farm industry. Despite, this Mexican farms have tripled their exports, in farm industry, because of the reduced tariffs. Canada has also seen a steady rise in their labor market. The main reason for this was that there was a huge productivity gap between, the US and Canadian labors Manufacturing Base: US manufacturing output rose by 58% compared to the preceding 14 year period, before NAFTA. ...read more.

The labor and manufacturing costs, as well as taxes are much lower in neighboring countries. This perspective, despite being a disadvantage on the US side, should be seen as a lesson to be taken. A direct competition with these markets should lead in decreasing the labor costs in the US. A growing liberalization and connections between these markets would actually be on the benefit of the US market since US has more programmed and better systemized productivity in most of its sectors and this is a competitive advantage as well as being a standard for the NAFTA partners to reach. In conclusion I think that having a liberalized trade, will be in the advantage of every stake holder in these markets with a higher competition rate. With a better competition, in my opinion the sleeping giant will be awaken, and to be awake is what the partnering countries are in need. ...read more.