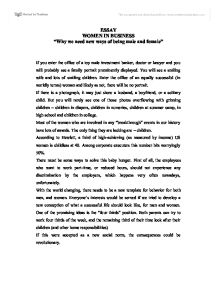 ESSAY WOMEN IN BUSINESS "Why we need new ways of being male and female" If you enter the office of a top male investment banker, doctor or lawyer and you will probably see a family portrait prominently displayed. You will see a smiling wife and lots of smiling children. Enter the office of an equally successful (in worldly terms) woman and likely as not, there will be no portrait. If there is a photograph, it may just show a husband, a boyfriend, or a solitary child. But you will rarely see one of those photos overflowing with grinning children - children in diapers, children in nurseries, children at summer camp, in high school and children in college. Most of the women who are involved in any "breakthrough" events in our history have lots of awards. The only thing they are lacking are - children. According to Hewlett, a third of high-achieving (as measured by income) US women is childless at 40. Among corporate executers this number hits worryingly 50%. There must be some ways to solve this baby hunger. ...read more.

Moreover, the studies show that women executives, when rated by their peers and bosses, score higher than their male counterparts on a wide variety of measures--from producing high-quality work to goal-setting to mentoring employees. Women are more collaborative, and seek less personal glory. Instead of being motivated by self-interest, women are more driven by ''what they can do for the company,''. They get high ratings on exactly those skills needed to succeed in the global Information Age, where teamwork and partnering are so important. Employing women in management But if women are so great, why aren't more of them running the big companies? In the USA, for instance, only two of the nation's 500 biggest companies have female CEOs: Hewlett-Packard Co.'s Carly Fiorina and Avon Products' Andrea Jung. And of the 1,000 largest corporations, only six are run by women. For one thing, most women get stuck in jobs that involve human resources or public relations--posts that rarely lead to the top. At the same time, female managers' strengths have long been undervalued, and their contributions in the workplace have gone largely unnoticed and unrewarded. ...read more.

It is terribly important that employers draw the right conclusions from the studies now being done. The studies will be useless-or worse, harmful-if all they teach us is that women are expensive to employ. What we need to learn is how to reduce that expense, how to stop throwing away the investments we make in talented women, how to become more responsive to the needs of the women that corporations must employ if they are to have the best and the brightest of all those now entering the work force. In fact, Kabacoff has just finished a new study showing how CEOs and corporate boards view upper management, and he found a clear double standard. Male CEOs and senior vice-presidents got high marks from their bosses when they were forceful and assertive and lower scores if they were cooperative and empathic. The opposite was true for women: Female CEOs got downgraded for being assertive and got better scores when they were cooperative. Kabacoff's conclusion? ''At the highest levels, bosses are still evaluating people in the most stereotypical ways.'' That means that even though women have proven their readiness to lead companies into the future, they're not likely to get a shot until their bosses are ready to stop living in the past. ...read more.