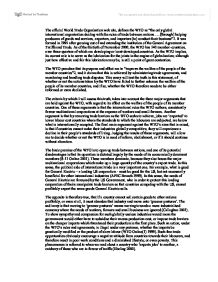 The official World Trade Organisation web site, defines the WTO as "the only global international organisation dealing with the rules of trade between nations . . . [through] helping producers of goods and services, exporters, and importers (to) conduct their business"1. It was formed in 1995 after growing out of and extending the institution of the General Agreement on Tariffs and Trade. As of the thirtieth of November 2000, the WTO has 140 member-countries, over three-quarters of which are developing or least-developed countries. As the WTO implies, its current role is to serve as the lubrication for the joints in the engine of globalisation; although just how effective and fair this lubrication may be, is still a point of great contention. The WTO preaches that its purpose and effect are to "improve the welfare of the people of the member countries"2, and it claims that this is achieved by administering trade agreements, and monitoring and handling trade disputes. This essay will test the truth in this statement, of whether or not the actions taken by the WTO have failed to further enhance the welfare of the people of its member countries, and if so, whether the WTO therefore needs to be either reformed or even abolished. The criteria by which I will assess this truth, takes into account the three major arguments that are held against the WTO, with regard to its affect on the welfare of the people of its member countries. ...read more.

1999). It forgets that these economies lack the infrastructure to capitalise on their own potentially competitive industries, and therefore must succumb to the will of self-focussed multinationals in order to preserve a tortured survival (Sirico 2000). It makes no sense that the WTO wishes countries to focus on those industries in which they are globally competitive, and yet allows dominating multinationals to 'milk' their local industries of their rightful funds. Wills proffers the example of Uganda and Nestle. Coffee being Uganda's main export good, and Nestle being the multinational corporation which 'exports jobs' from its home economy, in order to rob Uganda's workers of their equivalent wage and work conditions. The entire production process of the coffee is completed in Nestle's factories located in Uganda, before being shipped over and sold to retailers in Nestle's home economies. The only profit the Ugandan's truly receive, is the paltry price for which they sold the unprocessed coffee. It is very easy to rationalise this unfair exploitation with economic rules and models which follow logical principles, a task the WTO is trying to achieve using the support of its four major member-country economies; the US, Canada, the European Union, and Japan. Unfortunately, on the other side of this free-trade coin, there is a country whose majority of members suffer from exploitative work practices and sub-standard work conditions. That the WTO serves as a forum for countries to "thrash out their difficulties"3 regarding their trade practices, is of no consequence when the foundations upon which the WTO's rules and agreements stand is considered. ...read more.

At present, this includes Australasia and "the economic backwaters of the world"6, Africa and the Indian sub-continent. Within such a future, those countries not in supranational trading blocs, are denied access to "half of all global imports" 6. To this degree, it doesn't seem as if the WTO wants to unite the world's trading arrangements. In fact, its motives would appear simply to capitalise on those trade arrangements occurring between the three proposed regional trading blocs; a move which would almost certainly cleave a planet's trading arrangements in two, with one side geographically and economically disadvantaged. For all of these reasons, I have decided that the WTO should be abolished. Inefficiency is nothing compared to poverty and greed. Why is it that we must always compete so viciously that someone must get hurt? Where does growth really lead, but to one's overindulgence and another's lack thereof? More humanitarian ideals are necessary, if we as a global entity are to truly unite. No organisation which fosters monetary gain over sub-standard living, should ever be backed so powerfully by such greedy nations. By simply existing, the WTO serves as figurehead of what is wrong with the world; and what we need to do to fix it. Bibliography FOOTNOTES: 1: WTO - Website (http://www.wto.org/english/thewto_e/whatis_e/whatis_e.htm) 2: WTO - Website (http://www.wto.org/english/thewto_e/whatis_e/inbrief_e/inbr00_e.htm) 3: WTO - Website (http://www.wto.org/english/thewto_e/whatis_e/10ben_e/10b00_e.htm) 4: Callaghan, D., Class Notes : 2001 5: WTO - Website (http://www.wto.org/english/thewto_e/whatis_e/inbrief_e/inbr00_e.htm) 6: Chong, F., February 1 The Australian p.28. ...read more.