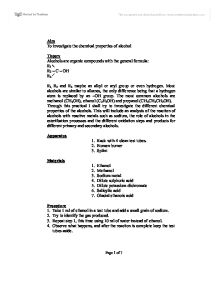 Aim To investigate the chemical properties of alcohol

Aim To investigate the chemical properties of alcohol Theory Alcohols are organic compounds with the general formula: R1 R2 - C - OH R3 R1, R2 and R3 maybe an alkyl or aryl group or even hydrogen. Most alcohols are similar to alkanes, the only difference being that a hydrogen atom is replaced by an -OH group. The most common alcohols are methanol (CH3OH), ethanol (C2H5OH) and propanol (CH3CH2CH2OH). Through this practical I shall try to investigate the different chemical properties of the alcohols. This will include an analysis of the reaction of alcohols with reactive metals such as sodium, the role of alcohols in the esterifcation processes and the different oxidation steps and products for different primary and secondary alcohols. Apparatus 1. Rack with 4 clean test tubes. 2. Bunsen burner 3. Splint Materials 1. Ethanol 2. Methanol 3. Sodium metal 4. Dilute sulphuric acid 5. Dilute potassium dichromate 6. Salicylic acid 7. Glacial ethanoic acid Procedure 1. Take 1 ml of ethanol in a test tube and add a small grain of sodium. 2. Try to identify the gas produced. ...read more.

This is because without the use of H+ ions as catalysts, it will take days to establish the equilibrium at room temperature. The reaction is given below: CH3COOH (aq) + C2H5OH (aq) --> CH3COOCH2CH3 (aq) + H2O (l) While the mixture should be heated to allow the equilibrium to be established fast, it is also important to note that boiling the mixture will lead to unsuccessful results because ethanol has a low boiling point of 780 C, and hence heat might cause it to vapourize thus hindering the esterification process. Moreover, ethyl ethanoate itself is very volatile having a boiling point of 770 C and hence the ester produced might be completely lost in the heating process. Moreover, ethanol vapour is extremely flammable and hence once it boils off it might catch fire. It was also interesting to note that the smell of the ester became more prominent after the heated mixture was added to water. This is because initially a certain amount of the alcohol was in excess but when the mixture was added to water the excess alcohol dissolved and as a result the ester's smell became more prominent. ...read more.

It is for this reason that the sodium metal should be always stored under kerosene, because on exposure to air it will react explosively. The esterification reaction between the ethanoic acid and ethanol should be heated but not boiled, because boiling will affect the esterification process and lead to erroneous results. Conclusion Through this investigation I was able to gain an insight into the chemical properties of alcohol. The conclusions from this investigation were that: (i) Reactive metals such as sodium react with ethanol to produce hydrogen gas. However, the reaction is not as vigorous as the reaction between the reactive metals and water. (ii) Acids react with alcohols in the presence of an acid catalyst to produce an ester. The ester produced might have a fruity smell such as ethyl ethanoate. It is because of the smell of esters that they are found to be of immense use in commercial goods. (iii) Alcohols undergo oxidation depending on the number of hydrogen atoms attached to the carbonyl carbon. While, a primary alcohol, in the presence of excess oxidising agent, undergoes a complete two step oxidation to form an alkanoic acid - secondary alcohols undergo one step oxidation to form alkanones. Tertiary alcohols however do not undergo oxidation at all. ?? ?? ?? ?? 1 Page 1 of 7 ...read more.