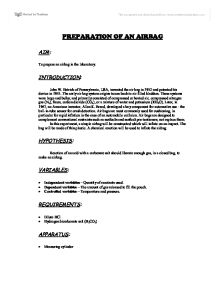 PREPARATION OF AN AIRBAG AIM: To prepare an airbag in the laboratory. INTRODUCTION: John W. Hetrick of Pennsylvania, USA, invented the air bag in 1952 and patented his device in 1953. The early air bag system origins traces back to air filled bladders. These systems were large and bulky, and primarily consisted of compressed or heated air, compressed nitrogen gas (N2), freon, carbon dioxide (CO2), or a mixture of water and potassium (KH2O). Later, in 1967, an American inventor, Allen K. Breed, developed a key component for automotive use - the ball-in-tube sensor for crash detection. Air bags are most commonly used for cushioning, in particular for rapid inflation in the case of an automobile collision. Air bags are designed to complement conventional restraints such as seatbelts and seatbelt pre-tentioners, not replace them. ...read more.

The impact leads to the inflation of the airbag. The airbag is made according to the following method: 1. Measure 200.0 cm3 of dilute HCl with a measuring cylinder and pour it into the plastic zip-pouch. 2. Weigh 8.0 grams of H2CO3 with an analytical balance. 3. Divide the weighed salt into two equal parts and add it into two test tubes. Cork the test tubes with rubber corks. 4. Add the test tube into the zip-pouch. When the airbag is ready, an impact has to be applied on the airbag. The impact will shatter the test tubes and the dilute acid present will react with the carbonate salt to give out gas. DATA COLLECTION: Least counts: Measuring cylinder = 0.20 cm3 Analytical balance = 0.01 g Colour: HCl solution = Colourless Hydrogen bicarbonate salt = White (amorphous) ...read more.

There also could have been small leakages which may have increased the time taken for the pouch to inflate. Although the experiment was easy to follow, the amount of time taken for the bag to inflate is not appropriate enough for an accident. Hence, a more effective method should be used, in which the amount of time taken for the reactants to produce the gas reduces (like reactions between Mg and dilute HCl). Airbags have various applications in everyday life and play an important part in today's world. Some of these applications are listed below: * It is used to protect the occupants of a car, motorcycle, etc. in an accident * It is used as a cushion for landing of various space exploration machines, like Mars Pathfinder. * It is used to cushion the landing of objects from heights. * It reduces the injuries sustained to an automobile driver. ...read more.