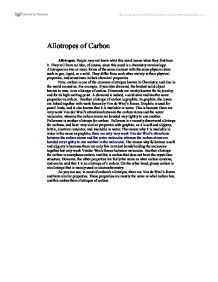 Allotropes of Carbon Allotropes. People may not know what this word means when they first hear it. They will have no idea, of course, since this word is a chemistry terminology. Allotropes are two or more forms of the same element with the same physical state such as gas, liquid, or a solid. They differ from each other mainly in their physical properties, and sometimes in their chemical properties. Now, carbon is one of the common allotropes known in Chemistry, and also in the world around us. ...read more.

In graphite, the layers are linked together with weak forces by Van de Waal's forces. Graphite is used for pencil leads, and is also known that it is insoluble in water. This is because there are very weak Van der Waal's attractions between the carbon atoms and the water molecules, whereas the carbon atoms are bonded very tightly to one another. Fullerenes is another allotrope for carbon. Fullerene is a recently discovered allotrope for carbons, and have very similar properties with graphite, as it is soft and slippery, brittle, electrical insulator, and insoluble in water. ...read more.

Another allotrope for carbon is amorphous carbon, and this is carbon that does not have the crystalline structure. However, the other properties are fairly the same as what carbon contains, and can be said that it is an allotrope of a carbon. On the other hand, glassy carbon is an allotrope that is mainly used in electrochemistry. As you can see, in most of carbon's allotropes, there are Van de Waal's forces and have similar properties. These properties are mostly the same as what carbon has, and this makes them allotropes of carbon. ...read more.