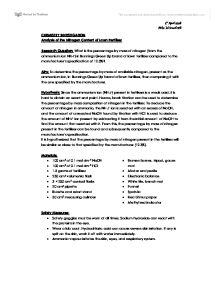 This may be overcome by using another indicator that allows for a clearer colour contrast. Another possible limitation which may have impacted the results is that some ammonia may still have been present in the conical flask. Although the red litmus paper may have served its purpose, this may still occur as a result of not boiling the solution long enough and thus some ammonia may not have evaporated. The result of this is that the ammonia in the solution will react with the hydrochloric acid, and therefore more hydrochloric acid will be required for the equivalence point to be reached, affecting the titre volume. This can be easily overcome by ensuring that the fertiliser solution containing water and sodium hydroxide is boiled for long enough so that all ammonia can evaporate, while simultaneously ensuring that the solution remains at a constant 90mL. The use of tap water may also have affected the results. It may not have been at a pH of 7 or may contain other contaminants such as salts which may ultimately interfere with the results. To overcome this, the most effective way is to use deionised water. Conclusion: It was found that the percentage by mass of nitrogen from the ammonium ion in Bunnings Green Up brand of lawn fertilizer was 13.9% (? 1.00%). This was very close to the percentage of nitrogen in lawn fertiliser as specified by the manufacturer ? 12.3%. ...read more.