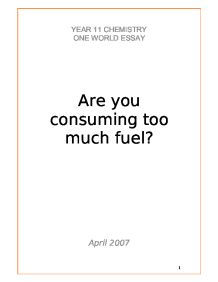 Are you consuming too much fuel?

YEAR 11 CHEMISTRY ONE WORLD ESSAY Are you consuming too much fuel? April 2007 Contents Page Introduction Page 3 My family fuel consumption Page 3 Local / Global: Where do I stand? Page 4 Impacts Page 6 Potential Alternatives Page 7 Limitations of study Page 8 Conclusion Page 9 Bibliography Page 9 Introduction During the last few years, the world has developed in both technological and scientifical aspects. Currently, we are dependant on fuel for almost every action we take. We use electricity to light our homes, natural gas to heat our food, and petrol to travel in our cars. Although each individual consumes a different amount of fuel, all amounts of consumption have great impacts on the world. Electricity consumption has been estimated to "increase by 71% from 2003 to 2030"1, which, no doubt, will have a drastic effect on the world. For this reason, in this essay, I will focus on the consumption of electricity as a fuel. To begin with, I will calculate and compare my family's fuel with the average consumption of a Portuguese family to discover where my family stands. I will then look at the societal, ethical and moral impacts and effects, as well as investigate potential alternatives to decrease my family's fuel consumption. While discussing the limitations of my study and addressing why my calculations may be misleading, I will conclude this essay with my personal informed opinion. My Family Fuel Consumption The electricity bill above shows two months of my family's fuel consumption, from 21/12/2006 to 19/02/2007. By looking at the bill above, you can see that my family consumed 1372kWh. However, since this bill only refers to two months and in order for me to compare my results with and average Portuguese family, I have to calculate my electricity consumption per year. Although it is not the most accurate way of calculating my annual consumption, I will to multiply my two month electricity consumption by six: 1372 x 2 = 8232 kWh / per year Local / Global: Where do I stand? ...read more.

If all the countries in the world were able to decrease their utilization of fossil fuels, then not only would it last longer but there would be fewer environmental problems. Several countries in the world are already acting towards this, and begun using renewable energy sources, and recently, Portugal has also realised this. By doing this, we will be acting morally and ethically as we will contribute positively to the environment's condition. Potential Alternatives: Fortunately, Portugal has good conditions to use various sources of energy. As you can see on the pie chart below, currently, Portugal uses three sources to produce energy4. 35% of the energy generated in Portugal is by using hydropower, also known as wind power, which is "the conversion of wind energy into more useful forms, using electricity using wind turbines"5 This form of energy is considered to be very beneficial to a country like Portugal, because it is one where wind is common. Because the Portuguese government has already started to implement turbines, and according to the pie chart above, we can see that action is being taken. Hydropower is also beneficial since it is a renewable energy source which does not increase the greenhouse effect. When referring to the costs of energy sources, hydropower has shown to be less expensive than coal, oil and natural gases when they are used to produce energy. Another renewable energy which Portugal could use is hydroelectricity. Most hydroelectric power is known to come from "the potential energy of dammed water driving a water turbine and generator"6 Because Portugal is surrounded by water, this energy source could be extremely beneficial, as although it may be expensive to build a hydroelectric plant, but once it has been constructed, it will have a better effect on our environment than most power plants have. Also, due to the few personnel needed, labour costs will be low.7 On the other hand, there are disadvantages related to the use of hydroelectric power, such as the production of substances like methane and carbon dioxide in excess, which damages our surroundings. ...read more.

Also, I should have discovered the annual increase using data from 2006 to 2007, not 2005 to 2007, as I had to divide the result by two to find out the annual increase. For my third and fourth comparison, which was comparing my family fuel consumption to other countries, it can be considered imprecise as the information I obtained about these countries was from a different time than my family fuel. All of these factors show that my conclusions can be considered misleading, but unfortunately, this was the best I could acquire. Conclusion & Informed personal opinion: In the early stages of my essay I discovered that my family consumes less electricity on a yearly basis than first world countries, including my home country Portugal, but more electricity than third world countries. From this, I can answer the main question of this essay: I am not consuming too much fuel. However, that does not mean that my family should not attempt to reduce our electricity consumption. In my personal opinion, I feel that it is more important for individuals to take action than to improve the way electricity is consumed in Portugal. It is very important that our society is aware of the problems caused by consuming excessive electricity, but more importantly to know the difference between what they want and what they need. I am aware that all the people of the world take electricity for granted and therefore abuse of it, and so campaigns and associations should be made to inform the youth of how to live without depending on electricity. The people of Portugal also need to be taught how electricity is generated, and be aware that Portugal's energy sources, such as fossil fuels, are running out. By teaching people how to use electricity correctly and competently, not only will they make better use of it, but they will also understand that every time a television is left on without a viewer, and every time a light is on in an empty room, fuel is being unnecessarily wasted. ...read more.