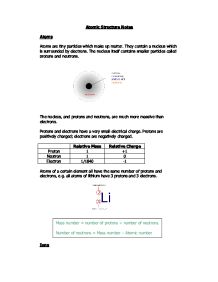 Atomic Structure Notes Atoms Atoms are tiny particles which make up matter. They contain a nucleus which is surrounded by electrons. The nucleus itself contains smaller particles called protons and neutrons. The nucleus, and protons and neutrons, are much more massive than electrons. Protons and electrons have a very small electrical charge. Protons are positively charged; electrons are negatively charged. Relative Mass Relative Charge Proton 1 +1 Neutron 1 0 Electron 1/1840 -1 Atoms of a certain element all have the same number of protons and electrons, e.g. all atoms of lithium have 3 protons and 3 electrons. Ions Atoms can gain or lose electrons so that they have unequal numbers of protons and electrons. These new particles are called ions. They are indicated by a charge. e.g 27Al3+ this ion has lost 3 electrons. 13 18O2- this ion has gained 2 electrons. 8 Isotopes The number of neutrons can vary. Isotopes are atoms of the same element with different numbers of neutrons and different mass numbers. e.g. chlorine, carbon, hydrogen Isotopes of an element have identical chemical properties, but they can have different physical properties. Isotopes of the same element with more neutrons have: * higher density * higher melting and boiling points * slower rate of diffusion Many isotopes are radioactive; these are called radioisotopes (radioactive isotopes) ...read more.

As electrons are successively removed, there is less shielding: the ionisation energy increases because the effective attraction to the positive nucleus is greater. c. Size of positive charge Removing an electron from a positive ion is more difficult than removing an electron from a neutral atom. The greater the positive charge on an ion, the harder it is to remove an electron, so the successive ionisation energies increase. Prediction of electron structure from ionisation energies The subsequent ionisation energies of an element can be used to confirm the electron configuration of the principal quantum shells. e.g. for sodium No of electrons removed ?Hi1 (kJ mol-1) Log10?Hi1 1 510 2.70 2 4560 3.65 3 6940 3.84 4 9540 3.97 5 13400 4.13 6 16600 4.22 7 20100 4.30 8 25500 4.40 9 28900 4.46 10 141000 5.14 11 158700 5.20 A graph of ionisation energy against log10?Hi will show a jump when an electrons start to be removed from a lower principal quantum shell. Electromagnetic waves Ocean waves travel on the surface of the water. You can see them and you can feel them. As you swim through the water, you can even make your own waves. The wind creates waves in the flag. Both the waves in the flag and the ocean waves are waves that you can see. ...read more.

At low absorbed energies, electrons may be excited to a higher energy level, then fall back to a lower energy level. At higher absorbed energies, bonding electrons separate. Covalent bonds break by homolytic fission and free radicals are formed. For example: Cl2 � *Cl + *Cl At very high absorbed energies, electrons can leave a molecule causing it to be ionised. For example: Cl2 � Cl + e- First Ionisation Energies of Successive Elements The first ionisation energy generally increases across a period because the nuclear charge increases, so the electrons are held more tightly, and more energy is needed to remove them. Nuclear charge also increases across a period, which pulls the electrons closer, decreasing the atomic radius. This also causes first ionisation energy to increase, because the attraction between the positive nucleus and negative electrons is greater when they are closer. There is a decrease between group 2 and group 3 elements. The electrons in the p sub-shell are at a higher energy level than those in the s sub-shell so are more easily removed. There is a decrease in first ionisation energy between groups 5 and 6. In group 6, there are two electrons in the same orbital of a p sub-shell. It is easier to remove one of them because the other electron in the orbital repels it. First ionisation energy decreases down a group, because there are successively more principal energy levels (shells) so electrons are further away from the nucleus, more shielded, and therefore less energy is needed to remove them ...read more.