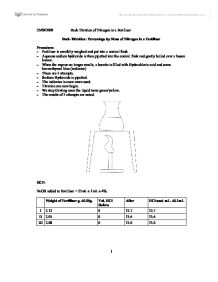 Back-Titration: Percentage by Mass of Nitrogen in a Fertiliser Procedure: * Fertiliser is carefully weighed and put into a conical flask. * Aqueous sodium hydroxide is then pipetted into the conical flask and gently boiled over a busen burner. * When the vapour no-longer smells, a burette is filled with Hydrochloric acid and some bromothymol blue (indicator) * There are 3 attempts. * Sodium Hydroxide is pipetted. * The indicator is once-more used. * Titration can now begin. * We stop titrating once the liquid turns green/yellow. * The results of 3 attempts are noted. DCP: NaOH added to Fertiliser = 25mL � 1mL � 4%. Weight of Fertiliser g. ...read more.

By simply making sure that the weight was 2.00g. each time, we could have largely simplified the process and made it a lot more accurate. We made sure in all cases that the NH4 was no-longer present in the boiling solution by holding wet PH paper over it or carefully smelling it. But by the end of the procedure, it is very simple to attempt to make the process faster and then forget to ensure that the NH4 is entirely used up. The PH paper helped to make it more accurate, because it would have been exceedingly difficult for us to make sure that all the NH4 had reacted simply by smell. In either case, we can't be 100% sure that it all reacted with the Sodium Hydroxide, which would have later changed our titration results. 25/09/2009 Back Titration of Nitrogen in a Fertiliser 2 ...read more.