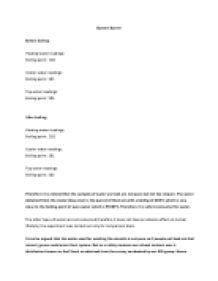 Checking the purity of water by boiling

water obtained from the cooler does not change because boiling it is too small a method to make it purer since it is already very pure. Different methods need to be taken up to make it purer which will include the addition of chemicals which is not too good for the humans anyway. The reason the tap water is already so pure is because the water is obtained from a tank fitted on the top of the school which uses purification methods such as a sand filter (to remove the dust particles) and UV lights to kill the germs as stated in the ESS survey. Initially we conducted the experiment on the water used to keep the food warm is because it is known that if water is impure then it takes more time to heat it up hence the energy required to heat it up is also higher. ...read more.

and that making the water pure would not have as significant an effect in conserving energy. Therefore the water section of the canteen does not cause any harm to the students as shown by this experiment and the survey conducted, hence it is not required to make changes in this sector. In theory if we were to apply this experiment on a large scale for the entire school, we would put large, more powerful solar panels on the roof of the building to boil the water. The experiment was conducted on a smaller scale. We managed to heat water through a solar panel. The concept thus applies when heating water on a large scale. We would use the solar panels to boil the water. This is a way of using a renewable resource, making Ecole Mondiale World School one step closer to becoming a ?Green School?. ...read more.