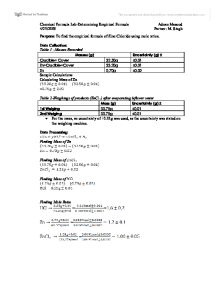 For the ratio of Zn, the value calculated was , when compared to the actual value of 1, there is percent error of 20%, and if uncertainties are considered the error is reduced to 10%. As for the mole ratio of zinc chloride, there is no error as that is what the ratios were relatively calculated from. While performing this lab, there were a few errors and weaknesses. One of the weaknesses was the fact that the weighing machine that was used only measured to two decimal places. Since small masses were being used, this accounted to relatively high uncertainties. An error that most likely occurred was when the water in the product was being evaporated, some of the probably also evaporated. ...read more.

Otherwise, there were not many other weaknesses as the procedure was very simple, and all that had to be done was weighing, and heating. And so those are the only two areas that can be improved on. This lab could be improved in a number of ways. First of all, a more precise scale can be used that measures to more decimal places. This in turn would reduce the overall uncertainties. Along with that, a lower flame should be used and should be further away from the cubicle. This way the heat distribution will be more equal, and no unnecessary evaporation of the product will occur. This way the value of the calculated mole ratio will be closer to the actual value. ?? ?? ?? ?? Chemical Formula Lab-Determining Empirical Formula Adnan Masood 4/23/2009 Partner: M. Singh ...read more.