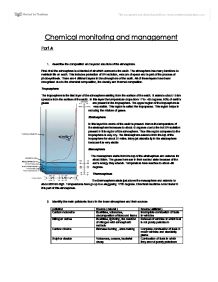 Chemical monitoring and management - composition of the atmosphere and the problems of pollution.

In the 1930's Ammonia was replaced with CFCS because at the time the properties of the CFC's were found to be 'safer' than ammonia. The inertness and low boiling point of the CFC'S led to them being used as solvents, propellants and blowing agents in foam. CFC's were extensively used as refrigerants.Halons (brominated CFC) are haloakanes which was developed to extinguish electrical fires. CFCs once used would gradually make its way up into the atmosphere. Because of their inertness would not disintegrate in the troposphere and would end up in the stratosphere where the C-CL bonds and C-Br bonds break due to the UV radiation hence depleting the ozone layer. 6. Present equations to show the reaction involving CFCs and ozone to demonstrate the removal of ozone from the atmosphere. CFC's undergo a process called photo dissociation which is a type of reaction in which Energy of light is used to break the bonds. Thereupon they release chlorine, bromine atom radicals. It is these radicals which destroy the o3 molecules which make up the ozone. 1) CClF3(g) + UV radiation ? CF3(g) + Cl�(g) 2) Cl�(g) + O3(g) ? ClO(g) + O2(g) 3) ClO(g) + O(g) ? O2(g) + Cl�(g) The above reactions show how the CFC gets broken up into chlorine and CF3. ...read more.

Many international agreements such as the Vienna convention and the Montreal protocol and further agreements in London and Copenhagen ensured that the use of CFC'S will be stopped over time. To the poor countries which still use CFCs financial aid is given in meeting the criteria of the agreements covered in the meetings. Recent research show the successfulness of the meetings. 11. Evaluate the effectiveness of the use of alternative chemical as a replacement for CFCs. Alternative chemicals such as HCFC and HFC have been introduced. HCFC has less chlorine atoms but still disintegrates the ozone layer. On the other hand HFCs have no chlorine bonded to them hence are environmentally and ozone friendly. The only disadvantage of this chemical is that it is expensive and is less efficient than the CFC it replaces. 12. Explain how information on changes in atmospheric ozone concentrations was obtained. Total Ozone Mapping Spectrophotometers or (TOMS) are instruments used onboard satellites to scan and measure ozone concentrations in the stratosphere. Since the ozone layer is present at the stratosphere, the ozone concentrations are usually monitored from balloons, satellite and ground based instruments In the late 80's the ozone spectrometer onboard the nimbus 7 satellite recorded thinning of the ozone layer at a significant rate over Antarctica. This led to the acceptance of the theory of CFCs and the chlorine radicals they produce in disintegrating the ozone layer. Hoon Kim yr 12 ...read more.