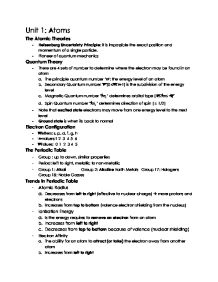 Unit 1: Atoms The Atomic Theories - Heisenburg Uncertainty Principle: it is impossible the exact position and momentum of a single particle. - Pioneer of quantum mechanics Quantum Theory - There are 4 sets of number to determine where the electron may be found in an atom a. The principle quantum number 'n': the energy level of an atom b. Secondary Quantum number 'l' [0ln-1] is the subdivision of the energy level c. Magnetic Quantum number 'm' determines orbital type [-lm+l] d. Spin Quantum number 'm' determines direction of spin [1/2] - Note that excited state electrons may move from one energy level to the next level - Ground state is when its back to normal Electron Configuration - l letters: s, p, d, f, g, h - n values:1 2 3 4 5 6 - l values: 0 1 2 3 4 5 The Periodic Table - Group : up to down, similar properties - Period: left to right, metallic to non-metallic - Group 1: Alkali Group 2: Alkaline Earth Metals Group 17: Halogens Group 18: Noble Gasses Trends in Periodic Table - Atomic Radius a. Decreases from left to right (effective to nuclear charge) --> more protons and electrons b. ...read more.

Unusually high boiling point and melting point. Hydrogens bond onto the negative poled molecule. Valency - The repulsion theory VSPER Is used to predict geometries of molecules - The Main Postulate: structure around a given atom is determined principally by minimizing electron pair repulsions - Gets as far away as possible (lone pairs have strongest repulsions) - Activity Series - used for single displacements reactions a. Shows the reactivity strengths between elements (which would displace the other) - Solubility - if in the solubility chart the substance has low solubility in it then a precipitate most likely has formed which means a reaction has probably occurred. - Types of Reactions - combustion, single displacement, double displacement, neutralization, synthesis. REDOX Reactions - Oxidation - where the atom LOSES electrons - Reduction - where the atom GAINS electrons - VERY IMPORTANT** - the oxidizing agent GAINS electrons but the oxidant LOSES electrons - the reducing agent LOSES electrons but the reductant GAINS electrons Law of __________. - Definite Proportions: A compound always contains same elements in the same ratios - Multiple Proportions: Two elements combine in the same ratios always. - Relative Atomic mass: Carbon 12.0 on the dot. One C-12 is given 12u - Isotope Abundance: Percent of an isotope in an element sample Balancing Nuclear Equations - Three types ...read more.

Burnable b. Soft, and usually do not have a hard mineral structure c. Usually liquids or solids MP<300 Hydrocarbons - Contains only hydrogen and carbon (hence the name) - Homologous series - when one compound differs from a preceding one by a -CH group - Alkanes are saturated compounds meaning they have full single bonds - The general formula for alkanes is Naming those Hydrocarbons Name Molecular Formula Structural Formula Phase at Room Temp methane gas ethane - gas propane -- gas butane --- gas pentane ---- liquid hexane ----- liquid heptane ------ liquid Naming Continued - Cyclo - when a ring is formed - Alkenes - when there is a double bond formed - Alkynes - when there is a triple bond formed Hydrocarbon Reactions - Hydrocarbons are non-polar (use of London-dispersion forces) - Cracking - when the hydrocarbon breaks up into smaller alkanes - Reforming - smaller alkanes combine to larger alkane - Combustion - basically full combustion: alkane + --> + Heat Reactions - Exothermic - energy is released - Endothermic - energy is absorbed - Basic heat equation is q = mc where q = energy in J, m = mass of object, c = specific heat capacity and delta t = change in temperature. This is the general equation - There is also , generally use when combustion is mentioned or when dealing with calorimetry ?? ?? ?? ?? ...read more.