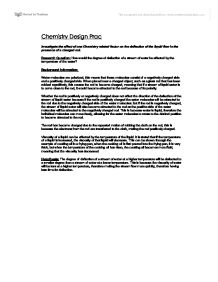 To ensure that the burette is vertical and the tip is in the same position for each trial, another two retort stands with a card with a cross point was placed permanently behind the burette. Another mark was drawn on the card to guide the height of approach the charged rod to the stream (as shown in diagram 1). 2. A white tile with a marked cross was placed in the collecting tray such that the centre of the cross was directly underneath the burette, then an A4 sheet of graph paper was placed of the tile (as shown in diagram 2). 3. Another beaker filled with approximately 400ml of distilled water was heated to approximately 65 degrees centigrade using a Bunsen burner (as shown in diagram 4). Some of this water was transferred to the burette using a 100ml beaker and a funnel. 4. Once the water was transferred to the burette, the temperature was measured using a thermometer. 5. A glass rod was electrostatically charged by rubbing it with a dry silk cloth 15 times backwards and forwards. 6. The tap of the burette was fully opened and the charged rod was placed close to the stream of water at the level indicated by the mark on the paper behind. ...read more.

The charge of the rod The charge of the rod will be rubbed 15 times before each trial to ensure that the charge of the rod does not vary significantly and in turn, affect the results collected. The thermometer used The same thermometer will be used to make sure that the degree of error is the same and that it does not vary when measuring the temperature of the water. Temperature of the water The temperature of the water will be attempted to be kept at approximately the same temperature as it will be observed regularly and adjusted if necessary. The experimenter The degree of error is different for different experimenters; to avoid this, the same experimenter will conduct the experiment for the entirety of the experiment. Data Table Distance from origin to the maximum distance of water deflected (cm) Trail 1 Trail 2 Trail 3 Trail 4 Trail 5 Average Water at 60? Water at 10? Safety * Handle with care when using the Bunsen burner, as it can be dangerous due to the heat produced. * Hot water will be used in this experiment, be careful when handling the hot liquid. * Appropriate clothing shall be worn while conducting the experiment. * Appropriate footwear shall be worn while conducting the experiment * Act in an orderly manner, as not to cause harm to others and one's self and affect the results. ...read more.