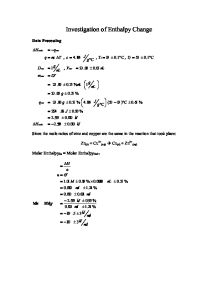 Investigation of Enthalpy Change Data Processing Since the mole ratios of zinc and copper are the same in the reaction that took place: Zn(s) + Cu2+(aq) --> Cu(s) + Zn2+(aq) Molar EnthalpyZn = Molar EnthalpyCu2+ Conclusion: In conclusion, the redox reaction involving zinc and copper (II) is an exothermic reaction which occurred in a closed system. This is due to the increase in temperature of the surroundings, copper (II) sulfate, from an initial temperature of 20.0 � 0.5 ? C to a final temperature of 45.0 � 0.5 ? C which can be observed in the table. In addition, the graph above shows the temperature of the surroundings in relation to time, which further proves these results. Because the temperature of the surroundings increased, this meant that the system (reaction between zinc and copper (II) ) lost energy resulting in a decrease in enthalpy. Once the temperature stabilized at 45.0 � 0.5 ? C, it was observed that excess zinc remained in the Styrofoam cup. Furthermore, the theory is further proven in the calculations conducted regarding enthalpy change. Since ?H was calculated to be -2100�100J, which is a negative number, it is, thus, an exothermic reaction. ...read more.

Thus, the cups were cut smaller in order for accurate readings to be read from the thermometer. Nevertheless, the cups no longer fit perfectly together and there were gaps left between the cups leaving room for energy to be transferred between the calorimeter and the air in the room, despite taping the cups together. Next, the precision of the measuring devices inhibits the results of the experiment to match the accepted value of enthalpy change. Because there are uncertainties in all the equipment used, there is a margin of error associated with each apparatus. Nevertheless, the margin of error increases with consecutive calculations regarding enthalpy change. Thus, all calculations will not be completely accurate leading to discrepancies between experimental and accepted values. Also, this weakness is insignificant in comparison to the inefficiency of the calorimeter used and is difficult to circumvent. Moreover, a less significant weakness is involved with the transferring of solutions. When transporting the copper (II) sulfate solution from the pipette to the Styrofoam cup, some droplets of the solution were left behind in the pipette. Nevertheless, this does not make a large difference in the overall experiment, therefore making it a less significant weakness. ...read more.

Nevertheless, if this is not available, smaller Styrofoam cups could be used in the polystyrene calorimeter therefore preventing one's self from cutting large cups that do not fit together. Next, even though uncertainties were associated with all measuring devices, the most precise equipment available was used to prevent large uncertainties. For example, a pipette was used to measure the copper (II) sulfate solution instead of a beaker, which has a larger uncertainty associated with it. Furthermore, a scale with a very small uncertainty was used rather than a scale with a larger uncertainty. In the future, the usage of the most precise equipment should be used, such as a more precise weighing scale and pipette. In addition, in order to prevent some of the zinc powder from being left behind, a more solidified sample of zinc should be used. Therefore, the measured quantity of zinc would be the same as the amount of zinc actually transported to the calorimeter, even though zinc was added in excess to this experiment. Also, a stirring rod could be used in order to ensure that both reactants mix thoroughly. Lastly, human error is unavoidable. Nevertheless, In order to minimize this, one should be more careful when handling equipment and measuring devices. ...read more.