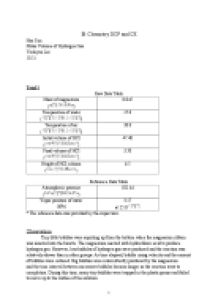 ﻿IB Chemistry DCP and CE Hao Sun Molar Volume of Hydrogen Gas Youhyun Lee 11(1) Trial 1 Raw Data Table Mass of magnesium () 0.045 Temperature of water () 25.0 Temperature of air () 20.0 Initial volume of HCl () 47.40 Final volume of HCl () 3.50 Height of HCl column () 6.5 Reference Data Table Atmospheric pressure () 102.44 Vapor pressure of water (kPa) 3.17 at 25.0 * The reference data was provided by the supervisor. Observation Tiny little bubbles were squirting up from the bottom when the magnesium ribbon was inserted into the burette. The magnesium reacted with hydrochloric acid to produce hydrogen gas. However, less bubbles of hydrogen gas were produced and the reaction was relatively slower than in other groups. As time elapsed, bubble rising velocity and the amount of bubbles were reduced. Big bubbles were intermittently produced by the magnesium and the time interval between successive bubbles became longer as the reaction went to completion. During this time, many tiny bubbles were trapped in the plastic gauze and failed to move up to the surface of the solution. At the beginning of the reaction, a continuous small stream of solution flows from the burette in the water. As time elapsed, the stream has diminished. ...read more.

It is because of the small measurement value of magnesium, which is about 0.040g. Thus, the mole of magnesium has percentage error of 2% and 3% respectively in two trials. Percentage errors of other values, like temperature and volume of hydrogen gas, are all below 0.3%. They are so small that have no effect on the final percentage error when added up with percentage error of mole. As a result, the percentage errors of moles of hydrogen gas are exactly the same as the final percentage errors. Two calculated values of molar volume are and . They are both smaller than the acceptable value and have a percentage error of 4.02% and 1.34% respectively. At the beginning, I suppose these systematic errors are due to the dilation of hydrochloric acid. There was a tiny flow of liquid out of the burette and the sunken magnesium fragment produced bubbles. Both are evidences that hydrochloric acid solution in the burette mixed with water in the beaker and the concentration of solution in the burette fell. However, I denied the idea soon because no lump remained in the gauze after the reaction went to the completion. So I suppose the source of systematic errors is the measurement of hydrogen gas produced. In the first trial, I observed many tiny bubbles attached to the gauze during the reaction. ...read more.