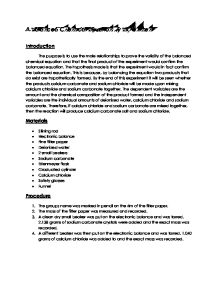 Results Quantitative Results Na2CO3 2.138 grams CaCl2 1.040 grams Final Substance (Na2CO3 + CaCl2 ) 2.125 grams Filter Paper Qualitative Results Na2CO3 * When mixed with water, foam appeared at the side and the surface of the solution * There was also a white flaky substance that formed CaCl2 * When mixed with water, the solution fogged up with foamy substance at the sides of the solution * Tiny bubble like substance also formed at the side Final Substance (Na2CO3 + CaCl2 ) * When the two substances mixed together, a white powdery precipitate was formed. * The flakes of powder were easily broken down. Calculations Conclusion The initial hypothesis stated can now be proved correct as after completing the experiment, the statement, which stated that the experiment would prove the balanced chemical equation true. As in the balanced equation CaCO3 was formed, this is in fact calcium carbonate, which is the salt that was produced. It is known that a chemical reaction took place because a precipitate was formed, one of the indications of a chemical equation. ...read more.

This also occurred when the final solution was poured through the filter paper. This would have led to a change in the mass data of the initial products to produce the insoluble calcium carbonate salt. Another error that could have occurred includes the fact that the product produced was kept overnight exposed to dust particles which may have mixed with the product and changed the mass data or the chemical composition of it. Also, there may have been impurities within the instruments used to perform the experiment. As other classes also use the same instruments, it can be determined how well they were cleaned and what chemical residue may have been left on the instruments. Modifications to the procedure of this lab that can lead to fewer errors include and more reliable results would be to check the utensils used for the experiment very well and to clean them with a cleaning agent to cancel out the possibilities of chemical residues left on them. Also, leaving the filter paper with the product in an airtight container or other vessel that would allow for steady temperatures and not let any substances in or out of the vessel. ...read more.