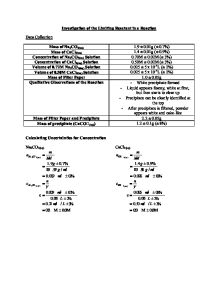 Using another object such as a cleaning rod would bring other factors into the experiment as some of the precipitate may have coated the cleaning rod which would lead to more inefficiencies. Lastly, human error is another weakness associated with this experiment. This could account for any spillage or human mistakes that may have been made throughout the course of the experiment. In order to improve the investigation one can use filter paper that is the same size as the funnel as this will omit room for human error. This will prevent some solution from being poured into the second funnel that was used in the experiment not allowing the precipitate to be filtered correctly. In addition, after filtering the solution through once and rinsing the beaker with distilled water, the solution should be filtered through the filter paper once again in order to increase the efficiency. Thus, if some precipitate went through once, it may be able to be caught on the filter paper the second time. In conclusion, the experiment proved to be quite successful with a percentage yield of 92 � 8%. In order to improve the experiment further, the improvements suggested above can help ensure a more accurate experiment. ?? ?? ?? ?? ...read more.