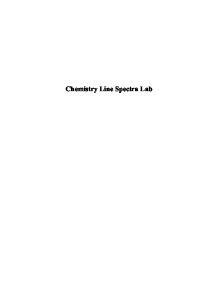 The difference between continuous and line spectrum is that a continuous spectrum shows all frequencies of radiation and a line spectrum only show specific lines of the visible spectrum unique to the substance at fixed wavelengths. In this experiment, line spectrums were produced when electricity was passed through the gas discharge tubes and the gas in the fluorescent light tubes. This is because when light was given off when electricity passed through a gas such as hydrogen, the current excites the atoms of the gas which can jump to an infinite amount of shells and the atoms then emits the absorbed energy in a specific amount of light called a quantum of energy, as electrons fall to a lower energy state. When a narrow beam of this light passed through prism in the spectrometer, a series of individual lines was observed, which converge towards the higher-energy end of the spectrum. Thus Hydrogen, and the other gases that were tested in the gas discharge tube and the fluorescent light tubes produced a line spectrum. The chemicals that were added to the flame of the Bunsen burner works similarly to the gas discharge tubes, except that the flame excites the electrons instead of electricity. ...read more.

The loud working environment could also be distracting to the lab member writing down the result because their hearing is impaired while trying to listen to the other member reading what they saw in the spectroscope. Some human errors include the reading of the wavelength and the colour. The wavelength is impossible to be exact with using the spectroscope and the colours were hard to tell especially between indigo and violet, which can alter the precision of the results. Another is the distance and angle the spectrometer was used could give inaccurate results because of the different intensity. There could also be a possibility that the light in the room was observed instead of the light from the gas discharge tubes or the flame of the Bunsen burner. The foggy goggles also impair vision, which lowers the ability to read the spectrometer accurately. Systematic errors include the flaws of the instrument used like the spectrometer which did not work properly since most lens fell through the eye piece. Without a proper spectrometer all the results could be altered. Improvements include better instruments for precise measuring, a better concentration to the work at hand, cleaner wires for burning the chemicals and better goggles for clearer vision and a quieter environment to focus and communicate with fellow lab members. ...read more.