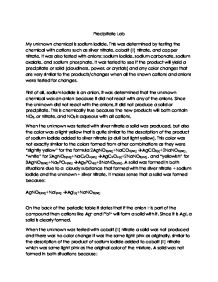 Precipitate Lab My unknown chemical is sodium iodide. This was determined by testing the chemical with cations such as silver nitrate, cobalt (II) nitrate, and copper nitrate. It was also tested with anions: sodium iodide, sodium carbonate, sodium oxalate, and sodium phosphate. It was tested to see if the product will yield a precipitate or solid (cloudiness, power, or crystals) and any color changes that are very similar to the products/changes when all the known cations and anions were tested for changes. First of all, sodium iodide is an anion, it was determined that the unknown chemical was an anion because it did not react with any of the anions. Since the unknown did not react with the anions, it did not produce a solid or precipitate. ...read more.

Since it is AgI, a solid is clearly formed. When the unknown was tested with cobalt (II) nitrate a solid was not produced and there was no color change it was the same light pink as originally, similar to the description of the product of sodium iodide added to cobalt (II) nitrate which was same light pink as the original color of the mixture. A solid was not formed in both situations because: Co(NO3)2(aq)+2NaI(aq) -->CoI2(aq)+2NaNO3(aq) According to the back of the periodic table it states that if the anion iodine is part of the compound then cations like Ag+, Pb2+, Hg22+, and Cu+ will form a solid with it, but iodine with all other cations form an aqueous solution. Therefore, since cobalt is not listed as one of the cations that iodine forms a solid with, no solid would be formed which is exactly what happened when sodium iodide was added to cobalt (II) ...read more.

Cu(NO3)2 (aq)+2NaI(aq) --> CuI2(s)+2NaNO3(aq) According to the back of the periodic table it states that if the anion iodine is part of the compound then cations like Ag+, Pb2+, Hg22+, and Cu+ will form a solid with it. Therefore, since copper is listed as one of the cations that iodine forms a solid with, a solid would be formed which is exactly what happened when sodium iodide was added to copper (II) nitrate. Since sodium iodide in combination with copper (II) nitrate was the only combination to form a dark yellow/orange color of all 4 anions in combination with the cation copper (II) nitrate sodium iodide seems the only option for the unknown. It is also not probable that the unknown is copper (II) nitrate because if there is a precipitate and a color change, it would not be the same color because different formulas yield different reactions like the colors formed. They are all unique. ...read more.