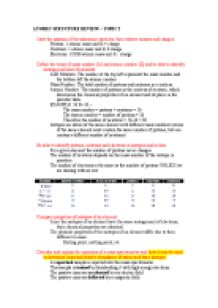 ﻿ATOMIC STRUCTURE REVIEW ? TOPIC 2 State the position of the subatomic particles, their relative masses and charges. Protons: 1 atomic mass unit & + charge Neutrons: 1 atomic mass unit & 0 charge Electrons: 1/1836 atomic mass unit & - charge Define the terms of mass number [A] and atomic number [Z] and be able to identify isotopes and ions of elements. AZE Notation: The number at the top left represents the mass number and the bottom left the atomic number Mass Number: The total number of protons and neutrons in a nucleus Atomic Number: The number of protons in the nucleus of an atom, which determines the chemical properties of an element and its place in the periodic table. ...read more.

Compare properties of isotopes of an element Since the isotopes of an element have the same arrangement of electrons, their chemical properties are identical. The physical properties of the isotopes of an element differ due to their different in mass. Boiling point, melting point, etc. Describe and explain the operation of a mass spectrometer and how it may be used to determine mass and relative abundance of atoms and their isotopes. A vaporized sample is injected into the mass spectrometer. This sample is ionized by bombarding it with high-energy electrons. The positive ions are accelerated by an electric field. The positive ions are deflected by a magnetic field. ...read more.

Energy Level 2. Subshell 3. Orbitals 4. Spin Identify and explain the changes in first ionization energy for the existence of energy levels and sublevels. [HL] S subshell: 1 orbital ? 1st subshell ? 2 electrons P subshell: 3 orbital?s ? 2nd subshell ? 6 electrons D subshell: 5 orbital?s ? 3rd subshell ? 10 electrons F subshell: 7 orbital?s ? 4th subshell ? 14 electrons Apply the Aufbau principle, Hund's Rule and Pauli Exclusion Principle for the location of electrons. Aufbau principle: Used to determine the electron configuration of an atom. Build up. Hund?s Rule: Hotel game. Everybody gets his or her own room, then you double up. Pauli?s Exclusion Principle: Has to do with electron configuration. Opposite spin. ...read more.