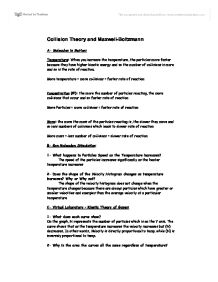 Why or Why not? The shape of the velocity histogram does not change when the temperature changes because there are always particles which have greater or smaller velocities and energies than the average velocity at a particular temperature C- Virtual Laboratory - Kinetic Theory of Gases: 1- What does each curve show? On the graph, N represents the number of particles which is on the Y axis. The curve shows that as the temperature increases the velocity increases but (N) decreases. In other words, Velocity is directly proportional to temp. ...read more.

They have the same shape and the shape of both is not affected by temperature change D- Kinetic Theory 1 1- What happens to the distribution of speeds of the particles when you run the simulation? The distribution of speeds becomes unequal as the simulation starts. Some particles move faster than others. 2- What is the relationship between this distribution histogram and the Maxwell-Boltzmann distribution that you saw in the last part? Both have the same shape. The area in both represents the number of particles and so the shape of both histograms is not affected by the change in temperature. ...read more.