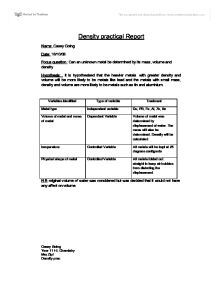 Density of a given metal

Focus question: Can an unknown metal be determined by its mass, volume and density

N.B original volume of water was considered but was decided that it would not have any affect on volume.

The data obtained from this experiment has been manipulated in this way to show the density. The data has been put through the formula density=mass/volume. This will determine the density which then can be graphed.

The calculation made from the raw data was that initial volume was taken away from final volume. This first then gave volume of the metals which then could be out into the formula density=mass/volume. Therefore density=26.8/3. This gave the density which then could be graphed. The r2 in the graph is the density. The error for the density was calculated by finding the percentage error of volume and mass and then adding them together. This created quite a large error as the percentage error was as big as the reading is some cases. 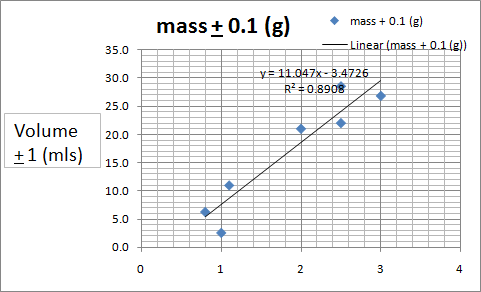 This graph had such large areas due to equipment being very inaccurate. The data collected had errors almost as large as the reading itself thus making the percentage error very large. 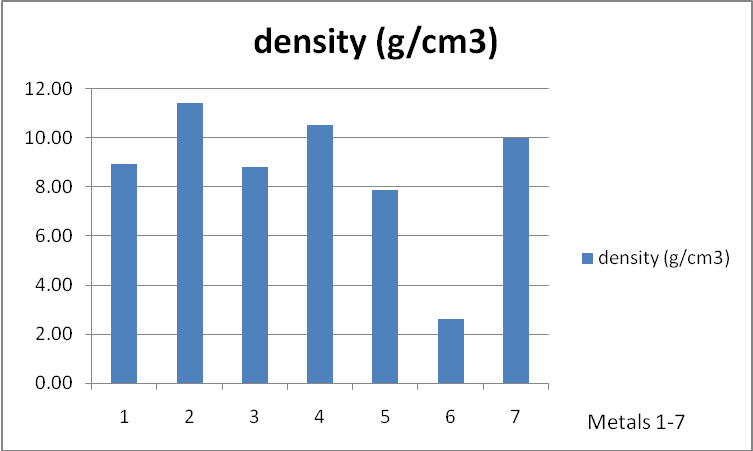 The metals had a large range of density’s which was partly due to inaccurate equipment making very large errors. 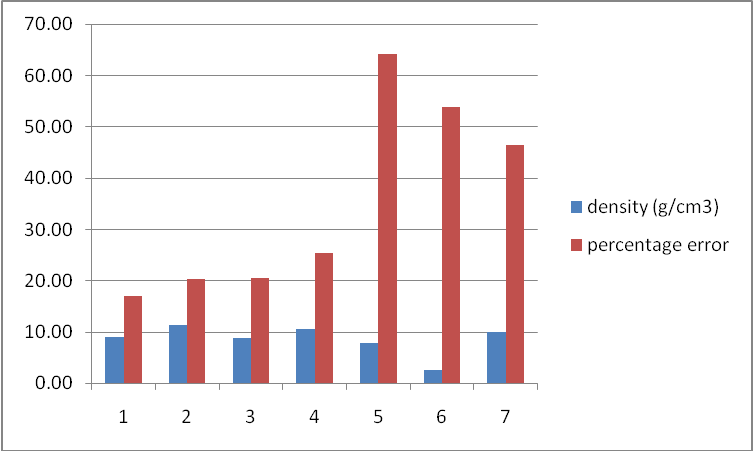 These density somewhat support the hypothesis that the heavier metals are lead and the lighter ones aluminium. The readings taken were too inaccurate to justify each metal.  Each density at least had an error of + 15% but in some cases reached + >50%. This was due to highly inaccurate measuring equipment especially the measuring cylinder. It is to hard to tell which metal is which with the readings taken and calculated due to the large errors in them.

The experimental design definitely did not help answer the question as there were to many errors to determine which metal was which. There were a few limitations to the design of this experiment. They were:-

The main and foremost error in this experiment was definitely the equipment as it was so inaccurate that it gave errors as large as the reading itself. Both of these systematic errors made it harder to provide proper data to be manipulated into the right density for each metal.