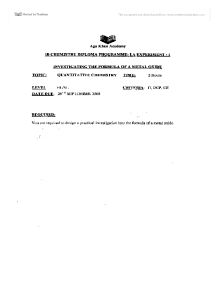 Design a practical investigation into the formula of a metal oxide.

the high temperatures may have caused the crucible to react. This would have affected the products formed. Lifting the lid may have lead to some of the products escaping and the product weighing less, therefore the ratio of magnesium to oxygen would be incorrect. Weighing the magnesium oxide while it was still hot would have caused an error as the products would have expanded and they would be heavier than they actually are. Other factors contributed to the precision of the results obtained. Scraping the magnesium ensured that pure magnesium was used and no other products were formed. Repetition of the experiment enabled a more accurate result to be achieved. Improvements The magnesium should be burnt in pure oxygen. This would reduce the formation of products other than magnesium oxide and would give more accurate results. A stronger crucible should be used so that it doesn't react during the high temperatures reached when the experiment is going on. Pure magnesium should be used to prevent the formation of products other than magnesium. ?? ?? ?? ?? ...read more.