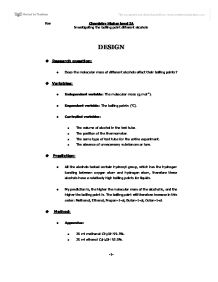 DESIGN * Research question: * Does the molecular mass of different alcohols affect their boiling points? * Variables: * Independent variable: The molecular mass (g mol-1). * Dependent variable: The boiling points (oC). * Controlled variables: * The volume of alcohol in the test tube. * The position of the thermometer. * The same type of test tube for the entire experiment. * The absence of unnecessary substances or ions. * Prediction: * All the alcohols tested contain hydroxyl group, which has the hydrogen bonding between oxygen atom and hydrogen atom, therefore these alcohols have a relatively high boiling points for liquids. * My prediction is, the higher the molecular mass of the alcohol is, and the higher the boiling point is. The boiling point will therefore increase in this order: Methanol, Ethanol, Propan-1-ol, Butan-1-ol, Octan-1-ol. * Method: * Apparatus: * 20 ml methanol CH3OH 99.5%. * 20 ml ethanol C2H5OH 95.0%. ...read more.

* Procedures: 1. Close the tap and run some distilled water into the top of the burette, then swish the burette up and down to let the water clean all the inside of the burette. Open the tap, let the water drain out. 2. Close the tap and use the funnel to put methanol into the burette. 3. Put the test tube under the burette and open the tap to let 20 ml of methanol drain into the test tube, and use a marker pen to label methanol to distinguish among different alcohols. 4. Use another retort stand with clamp and boss attached to clamp the test tube containing 20 ml of methanol. 5. Place the tripod below the test tube. 6. Use another clamp and boss to clamp the thermometer, make sure the bulb submerged in alcohol to measure and record the initial temperature. 7. Place the Bunsen burner above heat resistant mat, right under the tripod. 8. Immediately record the temperature when the alcohol boils. 9. ...read more.

This is because when the bulb touches the bottom of the test tube, the temperature read will be different. * The same type of test tube will be used to prevent differences in surface area. This is due to the fact that larger surface area A (m2) will result higher heat input or output ?Q (J) in the coefficient heat transfer, stated by Wikimedia Foundation: where ?Q = heat input or heat lost, J h = heat transfer coefficient, W/(m2K) A = heat transfer surface area, m2 ?T = difference in temperature between the solid surface and surrounding fluid area, K ?t = time period, s. * The burettes and funnels are rinsed carefully with distilled water prior to the experiment to ensure that inside the burettes do not contain any unnecessary substances/ions. If present, they may react with the alcohols to form products which affect the purity of alcohols. ?? ?? ?? ?? Ken Chemistry Higher level IA Investigating the boiling point different alcohols -1- ...read more.