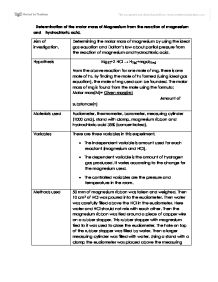 Determination of the molar mass of Magnesium from the reaction of magnesium and hydrochloric acid.

Determination of the molar mass of Magnesium from the reaction of magnesium and hydrochloric acid. Aim of investigation. Determining the molar mass of magnesium by using the ideal gas equation and Dalton's law about partial pressure from the reaction of magnesium and hydrochloric acid. Hypothesis Mg(S)+2 HCl � H2(g)+mgcl2(aq) From the above reaction for one mole of mg, there is one mole of h2. By finding the mole of h2 formed (using ideal gas equation), the mole of mg used can be founded. The molar mass of mg is found from the mole using the formula: Molar mass(M)= Given mass(m) Amount of substance(n) Materials used Eudiometer, thermometer, barometer, measuring cylinder (1000 cm3), stand with clamp, magnesium ribbon and hydrochloric acid 35% (concentrated). Variables There are three variables in this experiment. * The independent variable is amount used for each reactant (magnesium and HCl). * The dependent variable is the amount of hydrogen gas produced. It varies according to the change for the magnesium used. ...read more.