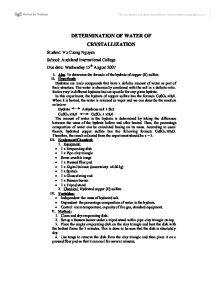 DETERMINATION OF WATER OF CRYSTALLIZATION

DETERMINATION OF WATER OF CRYSTALLIZATION Student: Vu Cuong Nguyen School: Auckland International College Due date: Wednesday 15th August 2007 I. Aim: To determine the formula of the hydrate of copper (II) sulfate. II. Hypothesis: Hydrates are ionic compounds that have a definite amount of water as part of their structure. The water is chemically combined with the salt in a definite ratio. Ratios vary in different hydrates but are specific for any given hydrate. In this experiment, the hydrate of copper sulfate has the formula CuSO4.xH20. When it is heated, the water is released as vapor and we can describe the reaction as below: Hydrate Anhydrous salt + Salt CuSO4.xH20 CuSO4 + xH20 The amount of water in the hydrate is determined by taking the difference between the mass of the hydrate before and after heated. ...read more.

2. Set up a Bunsen burner under a tripod stand with a pipe-clay triangle on top. 3. Place the empty evaporating dish on the clay triangle and heat the dish with the hottest flame for 3 minutes. This is done to be sure that the dish is absolutely dry. 4. Use tongs to remove the dish from the clay triangle and then place it on a pressed fiber pad so that it can cool for several minutes. 5. Use a digital balance to determine the mass of the cooled evaporating dish. Record this mass to the same number of decimal places as the uncertainty of the balance (�0.001g), in other words, the measured mass will have 3 decimal places. Remember not to weigh the dish when it is hot because heat waves tend to be circular and upward, which tends to make objects appear to weigh less. ...read more.