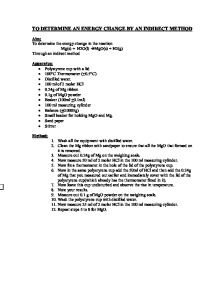 occurred are: * Reusing the polystyrene cup can lead us to inaccurate results as the second reaction could be contaminated if the cup was not washed properly with distilled water. * The lid on the polystyrene cup was placed on it only after both the substances were put into the cup and the reaction started occurring. This would give us inaccurate results as the temperature was not measure justly as a lot of initial heat given off in the reaction was not taken into account. * The thermometers could have been influenced by the temperature outside of the cup as the experiment was being carried out next to a window. * During a couple of the trials, the lid was not able to be fixed properly on the cup. * One of the major errors was the fact that we assumed that the hydrochloric acid was equal to the amount of water. We can't really change this considering that 100% pure HCl is in gaseous state. It is an error that we must take account of though. ************ ...read more.