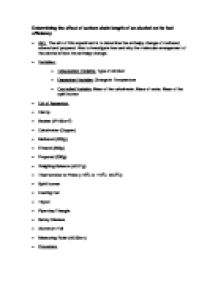 Determining the effect of carbon chain length of an alcohol on its fuel efficiency * Aim: The aim of this experiment is to determine the enthalpy change of methanol, ethanol and propanol. Also to investigate how and why the molecular arrangement of the alcohol affects the enthalpy change. * Variables: * Independent Variable: Type of Alcohol * Dependent Variable: Change in Temperature * Controlled Variable: Mass of the calorimeter, Mass of water, Mass of the spirit burner * List of Apparatus: * Clamp * Beaker (2*100cm3) * Calorimeter (Copper) * Methanol (200g) * Ethanol (200g) * Propanol (200g) * Weighing Balance (�0.01g) * Thermometer or Probe (-100C to 1100C, �0.20C) * Spirit burner * Heating mat * Tripod * Pipe-clay Triangle * Safety Glasses * Aluminum Foil * Measuring Ruler (�0.05cm) * Procedure: * Set up the stand and the clamp at a set height above the wick of the spirit burner. * Weigh 20.00 grams of water on a pre-weighed beaker using a 2 d.p weighing balance. * Put the 20.00 grams of water in the calorimeter and record its temperature using a probe of thermometer. ...read more.

These values are relatively close to each other and support my hypothesis which was that as the carbon chain length increased the enthalpy of combustion would increase. I encountered several sources of errors during this lab such as heat energy from the flames of the spirit burner which did not fully heat up the water due to the draught of air caused by the air conditioner. This source of error could be overcome by blocking this source of air off or carrying out this experiment at a different location. Another source of error encountered was heat loss from the beaker in which the water was boiled and this was because the beaker is not a perfect heat insulator. To combat this error, aluminum foil could have been used to wrap around the beaker and the experiment, thus reducing the amount of heat lost and ensuring most of the heat from the spirit lamp went to heating up the water. A major source of error in my lab also was the incomplete combustion of the alcohols due to a limited supply of oxygen thus the incomplete combustion of the alcohol formed carbon as soot and carbon monoxide. Preventing incomplete combustion would be to perform this experiment in an even more oxygen richer environment such that the alcohol could burn completely to form carbon dioxide and water. ...read more.