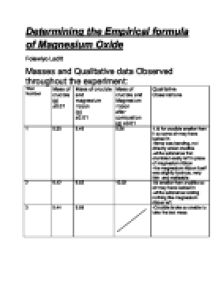 There are a few ways to improve and avoid the above errors. It is unlikely that a more accurate scale could be used but since the experiment works with such small values, this would definitely be more appropriate. Also it would be best to use another crucible or completely clean out the original in order to avoid the error from the second trial. I think the experiment should be completely more times to make more accurate assumptions as to whether or not how well the crucible was cleaned after the initial trial had an effect on the second. There is a very slight possibility that incomplete combustion did not occur, but increase the accuracy of the experiment it would be best to expose the magnesium as much as possible to oxygen. There may also be impurities in the magnesium ribbon, despite the fact that it was cleaned with steel wool. If making sure the sample was purely magnesium that should be taken into account as well. 1 (TrueKnowledge, 2011)http://www.trueknowledge.com/q/what_is_the_chemical_formula_for_%22magnesium_oxide%22) ?? ?? ?? ?? ...read more.