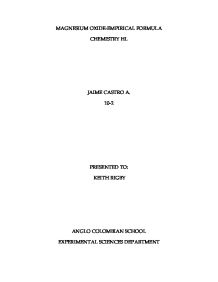 determining the empirical of magnesium oxide

The presence of the previously mentioned random errors can be easily explained by understanding the method used to develop the practical, since the oxygen was allowed to go into the crucible by taking the lid off, so when this occurred some of the newly formed magnesium oxide escaped out of the crucible and therefore some of it wasn't registered in the mass of magnesium oxide. To avoid the presence of the random errors I can suggest to improvements for this practical, first of all the use of better or more specialized equipment that allows us to have a more controlled way of introducing oxygen into the crucible where the magnesium is being heated. And secondly I suggest repeating the practical at least 2 times in order to calculate an average of the results so the possibility of random errors is reduced to its minimum. ?? ?? ?? ?? ...read more.