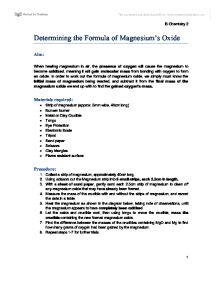 Determining the Formula of Magnesium's Oxide

Determining the Formula of Magnesium's Oxide Aim: When heating magnesium in air, the presence of oxygen will cause the magnesium to become oxidized, meaning it will gain molecular mass from bonding with oxygen to form an oxide. In order to work out the formula of magnesium oxide, we simply must know the initial mass of magnesium being reacted, and subtract it from the final mass of the magnesium oxide we end up with to find the gained oxygen's mass. Materials required: * Strip of magnesium (approx. 5mm wide, 40cm long) * Bunsen burner * Metal or Clay Crucible * Tongs * Eye Protection * Electronic Scale * Tripod * Sand paper * Scissors * Clay triangles * Flame resistant surface Procedure: 1. Collect a strip of magnesium, approximately 40cm long. 2. Using scissors cut the Magnesium strip into 8 small strips, each 2.5cm in length. 3. With a sheet of sand paper, gently sand each 2.5cm strip of magnesium to clean off any magnesium oxide that may have already been formed. ...read more.

There might not enough oxygen to react with magnesium which would explain the excess of moles in our final ratio, or more likely, our magnesium probably reacted with the nitrogen in the air (since there is a 78% abundance of N in air) to form some Magnesium Nitride. Since air is a mixture of oxygen and nitrogen gases, both elements react with the magnesium metal. Evaluation: For the most part, it seemed that everything we could have done to keep externalities from affecting the experiment results was done. The experiment was conducted inside a chemistry laboratory and the air temperature and moisture were relatively constant throughout the whole experiment. There was nothing that could have been done about the presence of Nitrogen in the air which might have reacted with the magnesium during heating as pure oxygen was not available, but if it were, the experiment may have been more accurate and our ratio could have been closer to 1 : 1. 1 http://www.practicalchemistry.org/experiments/the-change-in-mass-when-magnesium-burns,207,EX.html 2 Figure 1 3 Figure 2 4 Figure 3 ?? ?? ?? ?? IB Chemistry 2 1 ...read more.