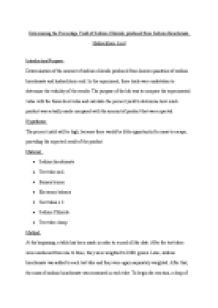 ﻿Determining the Percentage Yield of Sodium Chloride produced from Sodium Bicarbonate Hydrochloric Acid Introduction/Purpose: Determination of the amount of sodium chloride produced from known quantities of sodium bicarbonate and hydrochloric acid. In the experiment, three trials were undertaken to determine the viability of the results. The purpose of the lab was to compare the experimental value with the theoretical value and calculate the percent yield to determine how much product was actually made compared with the amount of product that was expected. Hypothesis: The percent yield will be high, because there would be little opportunity for mass to escape, providing the expected result of the product. ...read more.

After that, the mass of sodium bicarbonate was measured in each tube. To begin the reaction, a drop of hydrochloric acid was added to each test tube separately. Then, the fluid was evaporated from each test tube by heating it above a Bunsen burner flame until the solid was dry. Later, the test tube was removed from the flame and checked for remaining water vapor by inverting a clean, dry test tube over the mouth of the test tube containing the solid. Finally, after the tubes cooled down, they were all weighted and recorded in the table. Trials 1 (g) ...read more.

Looking at the Data collection, there were three trials which determined the variability of the data. In the calculations, it is noticeable that during the first trial the theoretical yield was 0.1448 g, and the percent yield was 97%. Also, from the calculations it can be concluded that on average the percent yield was 94%, which proves the hypothesis, because there is a low percentage of error. The lowest percentage yield was in the third trial with 87%. This could have been because not all the liquid was evaporated from the tube and thus there was error is mass calculation or there might have been too little/ much of hydrochloric acid making the reaction faulty in its results. ...read more.