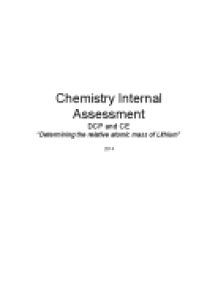 This implies that the experiment was not significantly affected by systematic errors. Evaluation Limitation Explanation Effect on results Significance of Limitation Improvements Oil being left on the Li The lithium was kept in oil as lithium is very reactive and reacts with both water and air. So although we tried to remove the majority of the oil there was is the possibility of there still being some left on the lithium. This would have increased the mass of lithium thus would have increased our value for the relative atomic mass of lithium. This could have had a small effect as the oil would have increased our mass, yet we did manage to remove most of the oil. Dried the lithium more thoroughly, or use a larger piece of lithium which you could then use to dissect a 0.050g piece from the center, where it had not been in contact with oil. Presence of Lithium oxide Lithium oxidizes in oxygen so although the lithium was kept under oil when we removed it from the oil it would have begun to oxidize. ...read more.