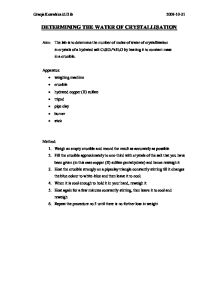 Determining the water of crystalisation

DETERMINING THE WATER OF CRYSTALLISATION Aim: The lab is to determine the number of moles of water of crystallization in crystals of a hydrated salt CuSO4*xH2O by heating it to constant mass in a crucible. Apparatus: * weighing machine * crucible * hydrated copper (II) sulfate * tripod * pipe clay * burner * stick Method: 1. Weigh an empty crucible and record the result as accurately as possible 2. Fill the crucible approximately to one-third with crystals of the salt that you have been given (in this case copper (II) sulfate pentahydrate) and hence reweigh it 3. Heat the crucible strongly on a pipeclay triangle constantly stirring till it changes the blue colour to white-blue and then leave it to cool. 4. When it is cool enough to hold it in your hand, reweigh it 5. Heat again for a few minutes constantly stirring, then leave it to cool and reweigh 6. ...read more.

Additionally, the crystal should not be to small. Errors also occurred when re-weighting the crucible. It was important to cool the crucible before weighting. Not only was it for our safety, but also for the precision of our measurement as the weighting machine could be influenced by heat. So an error could occur. An error could come up while stirring. It is possible that part of our substance was left on the stick what cause further errors. To improve the experiment * larger portion of salt * lid on the crucible (to avoid loss of crystals) * wider crucible (easier to heat) * more measurements * more time to cool down the crucible * weighting machine with more decimals (to lower the uncertainties) could be used. Also, there are some hydrates, which don't decompose before reaching their boiling point. For those, the method used in the experiment is not suitable. Removing water from melted form and crystalliation from anhydrous salt could be adopted. ?? ?? ?? ?? Gracja Kowalska kl.II ib 2008-10-31 ...read more.