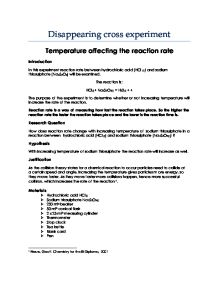 If the flask was taken out when the thermometer showed 22�C it would have increased a little bit so that the temperature would not have been 22�C. * The flaks was then quickly put on the cross card Now the reaction is ready to take place 2. The acid was now poured quickly into the flask and the added with sodium thiosulphate 3. As soon as the acid was in the flask the swirling of the flask and the stop clock were started 4. When the cross, under the flask, could no longer be seen through the liquid the stop clock was stopped 5. The equipment was then washed off and the same experiment took place with 4 other temperatures (32�C, 42�C, 52�C, 62�C), adding up to 5 temperatures in all. 6. The 5 experiment were then repeated, to see whether those results are in accordance with the first five results. This helps reducing the possible errors. The 5 experiments should give a clear answer to the research question: "How does reaction rate change with increasing temperature of sodium thiosulphate in a reaction between hydrochloric acid (HCl(l)) and sodium thiosulphate (Na2S2O3(l)) ?", as for each experiment the temperature of the sodium thiosulphate is increased by 10�C. ...read more.

Inaccuracies and Possible improvements Temperature is the only independent variable, so all other measurements and actions have to stay constant throughout the 5 experiments. These measurements and actions are: > The exact amount of hydrochloric acid and sodium thiosulphate > The time it took from when the wanted temperature was reached till the reaction took place (as the temperature slowly decreases in the time period) > The time it took before the swirling took place after the reaction took place and how quick the flask was swirled > How quick the stop clock was started and stopped after the reaction took place and the cross disappeared, respectively. And also the difference in temperatures from one experiment to the next one had to stay the same. (Example: experiment 1: 22�C, experiment 2: 32�C, experiment 3: 42�C. So 42-32=32-22) As all these could not possibly have stayed constant throughout the experiment these are the inaccuracies that could have caused the results not to be as exact as possible. As explained before the experiment was conducted without any noticeable errors so the only improvement, that could take place next time this experiment is conducted, is the one that concentrates on more precision of the above mentioned inaccuracies. 1 Neuss, Geoff. Chemistry for the IB Diploma, 2001 ?? ?? ?? ?? ...read more.