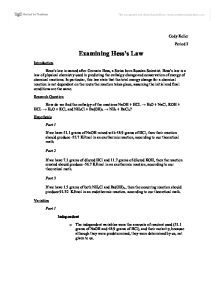 While none of our actual ?H values matched up exactly with the theoretical ?H values, all of the values successfully and accurately portrayed whether the reactions were endothermic or exothermic, which is principally what the lab is about, and none of our actual ?H values were astronomically off, or at least not off enough to make a significant difference. Furthermore, we were able to calculate the ?H's with a moderate amount of accuracy. This lack of exact accuracy indicates several errors in this lab. Firstly, human error is a gigantic factor. With so many calculations, sign changes, eyeball measuring, and other human inaccuracies undetected and therefore unaccounted for indefinitely contribute to the lack of accuracy. Also, inaccurate measuring tools and devices may have played a role. Finally, a lack of understanding of what was actually transpiring would have been tremendously helpful. When you don't fully understand the concepts being employed, you are going completely on "empty" formulas without an understanding of what you are actually doing, making it virtually impossible to detect error. If this lab were to be conducted again, there would be several different things I would do different. I would alter my methods of conducting this lab to minimize human error. Also, I would use more accurate measuring tools and devices. Finally, I would make my best effort to come into the lab with as much prior knowledge about the subject as possible, and also bring to the table a superb grasp of what was actually going on. ...read more.