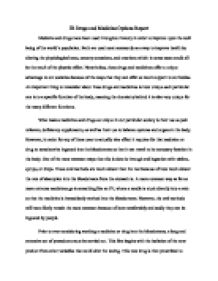 Drugs and Medicine Options Report. Prior to ever considering working a medicine or drug into the bloodstream, a long and extensive set of procedures must be carried out.

IB Drugs and Medicine Options Report Medicine and drugs have been used throughout history in order to improve upon the well being of the world's population. Both are used most commonly as a way to improve health by altering the physiological state, sensory sensations, and emotions which in some cases could all be the result of the placebo effect. Nonetheless, these drugs and medicines offer a unique advantage to our societies because of the ways that they can offer so much support to our bodies. An important thing to remember about these drugs and medicines is how unique each particular one is to a specific function of the body, meaning the chemistry behind it is also very unique for the many different functions. What makes medicines and drugs so unique in our particular society is their use as pain relievers, deficiency supplements, as well as their use to balance systems and organs in the body. However, in order for any of these uses to actually take effect it requires for that medicine or drug to somehow be ingested into the bloodstream so that it can travel to its necessary location in the body. ...read more.

The most effective of these commonly used bases is aluminum hydroxide because of the fact that it can completely neutralize three moles of hydrochloric acid for every one mole of aluminum hydroxide that is used. Another common metal oxide that is used is magnesium oxide because of how quickly it reacts and thus offers relief, however since it reacts so quickly the relief does not last for as long as it does with the other bases. The metal carbonates used as bases offer an alternative to the metal oxides but they also react to create carbon dioxide which results in antifoaming agents being required as well to make sure that the users are not throwing up. As discussed above, there are specific types of drugs that can be known to help with pain relief; these drugs are known as analgesics. There are really two different type of analgesics, strong ones that are more commonly known as narcotics, and milder analgesics that are typically the over the counter pain relievers. The stronger analgesics work by binding with the actual pain receptors in the brain to block the transmission of the pain signals between brain cells (Jordan). ...read more.

Nicotine being another stimulant is best known for its role in the addiction of smokers to their cigarettes. Nicotine can be very harmful to the body however as it can lead to cancer and it is very difficult to stop using after it has first been used. Looking back on the drugs and medicine in our culture today it can easily be seen that they do have a very positive role in our society but because of the power that they possess they can also be dangerous when not used properly. It is sometimes heard on the news of people dying from drug overdoses that involve heroin or codeine but the only reason that these occurrences are even a problem at all is because of the personal abuse from those using those drugs. When used properly and only when suggested to by a doctor, the drugs and medicine that are in our culture today provide a huge advantage for us as we try to improve upon how well we live our lives today. The important thing to remember here is that it is nearly always necessary to regulate the changes in medicine and drugs in our society despite how well we may seem to have it under control. ?? ?? ?? ?? ...read more.