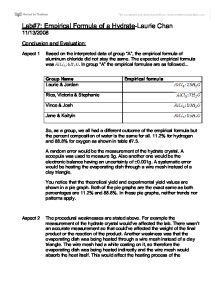 Empirical Formula of a Hydrate-CE

Lab#7: Empirical Formula of a Hydrate-Laurie Chan 11/13/2008 Conclusion and Evaluation: Aspect 1 Based on the interpreted data of group "A", the empirical formula of aluminum chloride did not stay the same. The expected empirical formula was. In group "A" the empirical formulas are as followed... Group Name Empirical formula Laurie & Jordan Rica, Victoria & Stephanie Vince & Josh Jane & Kaityln So, as a group, we all had a different outcome of the empirical formula but the percent composition of water is the same for all. 11.2% for hydrogen and 88.8% for oxygen as shown in table #7.3. A random error would be the measurement of the hydrate crystal. A scoopula was used to measure 3g. ...read more.

Although, the same balance was used to weigh all the masses, therefore the accuracy of those measurements were present with the exception of the uncertainty�0.001g. Aspect 3 If this lab were to be redone, I think that everything should stay the same besides 2 factors which are the use of wire mesh and the measurement of the hydrate crystal. If we were to use a clay triangle instead of the wire mesh, the evaporating dish would have been directly heated instead of being indirectly heated. This would remove the systematic error. A better precision and accuracy would be obtained if we actually used a measuring device. For example, a measuring spoon would've been more accurate than the scoopula. Using the same balance for all masses would obtain greater control of variables and reduce the random error. ...read more.